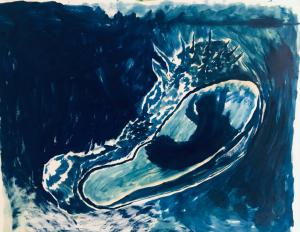 Artwork by Matías Duville Untitled, 2019, Oil on paper. Courtesy of the artist.

Logo for the Matías Duville exhibition at MOLAA.

The Museum of Latin American Art invites the public to this exhibit opening Sunday, August 25. Artist and Guest Curator will be available for interviews

The artwork in this exhibition is the result of the artist’s residency in MOLAA. This unique event provides Latin American & Latino artists a space to explore, develop and present their vision.”
— Lourdes Ramos, Ph.D., President & CEO of MOLAA

“The body of work that make up this exhibition is the result of the artist’s residency in MOLAA during the months of July and August 2019. This MOLAA residency is a unique event and an ideal occasion to provide Latin American and Latino artists a space to explore, develop and present their artistic vision. Matías Duville’s artwork draws the spectator into raw landscapes that provoke opportunities to connect with the personal imagery of the artist and explore the differences and similarities between deserts and oceans,” said Lourdes Ramos, Ph.D., President & CEO of MOLAA.

During the two months spent in preparation for his exhibit, Argentinian artist, Matías Duville, drew inspiration from Southern California’s deserts and oceans. Duville’s collection of drawings highlight the timeless interconnection between land and sea.

“For me, the Pacific Ocean is a strong influence; that’s the core of the exhibition,” said Duville. “The exhibition is a dialogue between the ocean and the desert, focusing on how they impact each other.”
His work is characterized by experimentation with expressive strokes and procedures which reveal a certain brutality. In his practice, Duville navigates questions such as permeability between inside and outside through the process of drawing, sculptures, moving images, and music with his band Centolla Society. The tension between opposites, mutation and time are some of the subjects that feature in his most recent works.

“The principle of this exhibit is not solely based on aesthetics, it’s conceptual,” said Stefanie Hessler, guest curator. “The idea of the convergence between the ocean and land is conveyed in the layout of the presentation.”

Duville’s “desert means ocean” exhibit will be on display at MOLAA from Sunday, August 25 through Saturday, December 1. The Museum of Latin American Art is located at 628 Alamitos Ave. in Long Beach. MOLAA is open Wednesday through Sunday with general admission priced at $10. For more information, visit MOLAA’s website at www.molaa.org or call (562) 437-1689.

About the Museum of Latin American Art (MOLAA)
The Museum of Latin American Art (MOLAA) is the pioneering museum in the United States dedicated to modern and contemporary Latin American and Latino art. Founded in 1996 by Robert Gumbiner, MOLAA houses a collection of more than 1,600 works of art including paintings, sculptures, drawings, mixed-media, photographs, and video art. The Museum is a multidisciplinary institution committed to providing a platform for cross-cultural dialogue through the arts, educational programs and events for the community.