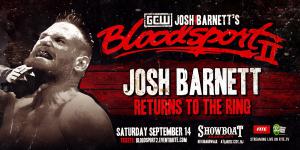 Bringing back one of the most gripping events of the year, Josh Barnett’s Bloodsport 2 comes to The Showboat in Atlantic City

It's the ultimate hybrid. MMA meets Pro Wrestling in the most intense, physical, and groundbreaking event in years. Who will survive when the shit gets real?”
— Brett Lauderdale, Owner of Game Changer Wrestling

Josh Barnett's Bloodsport 2 is an event that puts the world's best fighters into the ring (with no ropes) and tests them in an environment unique to all of sports and entertainment. It is MMA meets Pro Wrestling where Barnett will fight Chris Dickinson for the title card.

This year’s event brings talent from around the globe together. The world's most accomplished MMA stars, pro wrestling's "real life tough guys," and the fighters in between meet in a ring where the only way to win is by knockout or submission.

The event will be available live and free on FiteTV