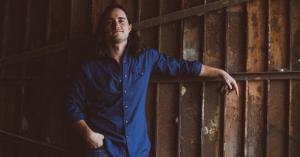 Lowe, raised on Alan Jackson, Dwight Yoakum, and Merle Haggard, wanted to do more than just give a nod to his early influences – he wanted to channel them – so he brought in songwriting partners David Payne, a honky tonk veteran from Lewisburg, TN, and producer/writer Andrew Scott Wills, of Nashville, to add that element of authenticity.

“I knew I wanted Cuss the Jukebox to sound like something I would’ve heard growing up, and Dave was the perfect guy to help me get there. We met when I was first getting started in Nashville – let’s just say he’s been playing bass in country bands and cranking out originals since before I was even born. The song was started back in 1982 and finished 37 years later.”

Wills, who produced the single, immediately loved the idea of an old throwback, embracing the challenge to create something iconic that would still work in today’s streaming digital world.

“On the heels of Ken Burn’s incredible PBS special I feel like music listeners are ready for a modern take on Classic Country. It was fun to step into the musical time machine and hear some of Dave’s stories from back in the day.”

“Cuss the Jukebox” can be found at Apple Music, Spotify, Amazon Music and other digital outlets.