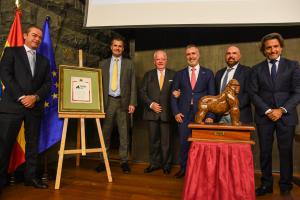 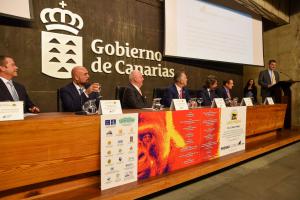 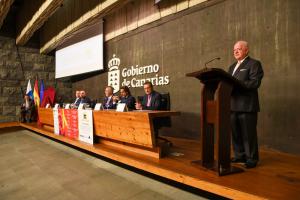 Loro Parque is working daily to bring the animal world closer to people… in order to educate and raise awareness among the public about the need to protect them.”
— Wolfgang Kiessling, President of Loro Parque

PUERTO DE LA CRUZ, SANTA CRUZ DE TENERIFE, SPAIN, October 21, 2019 /EINPresswire.com/ — The headquarters of the Presidency of the Government of the Canary Islands last Friday, October 18, hosted the presentation of the prestigious Gorilla 2018 Award to Steve Heapy, CEO of Jet2.com and Jet2holidays. The Award celebrates its sixteenth anniversary this year and highlights environmental responsibility, taking into account strategies and actions to conserve biodiversity and the sustainable use of resources.

On this occasion, Loro Parque wished to reward the airline's customer-oriented policy, with its strong commitment to environmental sustainability, as well as recognising Jet2.com as the first airline to reduce the use of plastic on board. More than 300 guests attended the event held in the Assembly Hall of the regional government, including numerous members of the local, island and regional authorities, as well as civilian, military, consular and private sector representatives.

Wolfgang Kiessling, President of Loro Parque, wanted to take the opportunity to highlight Mr. Heapy’s commitment to sustainability in the present environmental situation in the world, where overpopulation is causing irreversible damage to nature and the species that inhabit it. That is why over the 25 years of its trajectory, Loro Parque Fundación has invested 21 million U.S. dollars in hundreds of conservation projects all over the world, with multiples successful results, like in case of nine species of parrots that were saved from their imminent extinction. Mr. Kiessling also emphasized the role of the zoological institutions in this context, adding that if zoological parks did not already exist, they should have been urgently invented.

“Loro Parque is working daily to bring the animal world closer to people, so that they could appreciate their beauty, their character, their smell and their behaviour… all in order to educate and raise awareness among the public about the need to protect them,” highlighted the founder of Loro Parque and Loro Parque Fundación.

For his part, Steve Heapy wanted to strengthen his bond with the Canary Islands, which he said his company had supported "in good times and also in bad times." "We remain faithful to our destinations and work to create a beneficial and sustainable business model for both parties," added chief executive of Jet2.com and Jet2holidays.
He also wanted to underline his commitment in the fight against plastic, in the same line as Loro Parque. "It was Christoph Kiessling who, many years ago, told me about the large amount of plastic that ends up in the oceans," he said before detailing the actions that Jet2.com and Jet2holidays have been implementing to help save the planet.

About Steve Heapy and Jet2.com:

Steve Heapy joined Jet2.com in 2009 as Managing Director and Commercial Director. He previously held senior positions in other industry companies such as My Travel, Thomas Cook and Libra Holidays. In 2013, he was promoted to CEO as executive director of Jet2.com and the internal tour operator Jet2holidays.

Since its inception, Jet2.com has quadrupled its number of passengers and tripled its flights, positioning itself as a leader in capacity compared to other low-cost airlines. In addition, it has received numerous awards, such as the Bronze Award for ‘Best Tour Operator in the Iberian Peninsula and Canary Islands’ presented by the British Travel Awards in 2010.