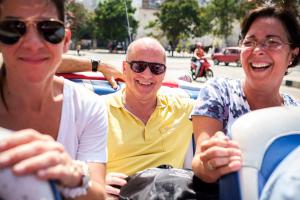 Chef Pernot and guests touring Havana in a vintage car.

Access Culinary Trips is one of the few U.S. tour companies currently licensed to operate in Cuba under the new U.S. travel rules”
— Tamar Lowell, CEO

PHILADELPHIA, PA, US, November 14, 2019 /EINPresswire.com/ — It’s the ultimate immersive culinary experience and an amazing luxury holiday gift for foodies and travelers alike — a once-in-a-lifetime cultural and historical adventure to Cuba led by an award-winning chef!

From Wednesday, March 4 through Monday, March 9, 2020, Guillermo Pernot, two-time James Beard Award-winning chef/partner of Cuba Libre Restaurant & Rum Bar, with locations in Philadelphia, Atlantic City, Orlando and Washington, D.C., will serve as host and tour guide for an intimate group of nine travelers to the Caribbean island nation. Chef Pernot will be leading guests on an excursion to experience the cultural and culinary treasures of the island, something he’s done since 2012. While travel to Cuba has become more difficult for Americans due to recent travel bans, the journey is a collaborative arrangement with Access Culinary Trips, a leading provider of small group, private culinary tours, which operates under the travel category of Support for the Cuban People.

“Access Culinary Trips is one of the few U.S. tour companies currently licensed to operate in Cuba under the new U.S. travel rules,” stated the company’s CEO, Tamar Lowell. “Our tours remain legal and were not impacted by the recently announced changes in any way. Our guests can legally travel under the category of Support for the Cuban People, since we only work with private citizens in Cuba, promoting Cuban entrepreneurship and connecting with the locals in a meaningful way. Despite the confusion following several recent announcements, we are actually seeing an increase in demand for our small group culinary tours. Our Cuba guests are protected from any further changes by our No Risk Refund Policy.”

The six-day, five-night culinary tour costs $3,990 per person for double occupancy accommodations and $4,680 for single occupancy. The price includes lodging in a deluxe private villa in Havana; all breakfasts, lunches and dinners (including a welcome drink at each); an expert bilingual tour leader and daily guided tours; and all ground transportation for activities included in the itinerary. The cost excludes airfare, required visa and other travel fees.

Guests on this groundbreaking, legal culinary trip will experience a lifetime of memories as they get a chance to connect with locals, immerse themselves in the Cuban food scene, explore farms and markets, cook with Chef Pernot and local chefs, and dine at some of the island’s most renowned private restaurants or paladares.

Highlights include:
• A walking tour of La Habana Vieja (Old Havana)
• Sunday dinner and daiquiri class in a local’s home, featuring a pig roast
• Dining at Cuba’s top private restaurants (El Biky, Habana Mia 7, Al Carbon)
• A sustainable farm tour with an organic, farm-to-table lunch
• Salsa lessons in the private home of a professional dance instructor
• A visit to Ernest Hemingway’s Cuban home (Finca Vigia) where he penned his most famous novels, and Cojimar — the fishing village that was the inspiration for The Old Man and The Sea
• Tour a cigar factory for some Cuban “Tobacco 101”
• Experience La Fábrica de Arte Cubano, Havana’s hippest nightlife spot, art gallery and performance venue, which was featured on TIME's 2019 list of the World's 100 Greatest Places
• A visit to an agricultural market, ration store and supermarket for true insights into the daily lives of Cubans

For more information about the trip to Cuba, please e-mail info@cubalibrerestaurant.com or view the entire itinerary and purchase tickets at https://www.accesstrips.com/tour/chef-travel-to-cuba.

About Chef Guillermo Pernot:
Award-winning Chef Guillermo Pernot has traveled to Cuba more than a dozen times over the past seven years, spending a total of half a year on the island. Each voyage brings new inspiration to Cuba Libre Restaurant & Rum Bar’s exciting menu, reflecting the current culinary movement that is emerging in the island nation. Pernot is the first American chef in over 40 years to cook in an embargoed country. He has earned numerous awards in the U.S. and is one of the leading chefs in today’s culinary scene representing Latin American cuisine. He is a two-time James Beard Award winner — once for “Best Chef of the Mid-Atlantic Region” and again for his book ¡Ceviche! Seafood, Salads and Cocktails with a Latino Twist, which was named “Best Single Subject Cookbook” in 2002. His former restaurant ¡Pasión! received numerous awards from several esteemed publications, including Philadelphia magazine, Gourmet, and Fodor’s. Pernot was named Esquire’s “Chef of the Year,” and was named one of Food & Wine magazine’s “America’s Ten Best New Chefs” as well as Restaurant Hospitality’s “Ten Rising Stars.” In October 2018, Pernot released his second cookbook, CUBA COOKS: Recipes and Secrets from Cuban Paladares and Their Chefs — which takes readers on an incredible journey through the history, culture and the ingredients that comprise Cuban cuisine.

About Cuba Libre Restaurant & Rum Bar:
Cuba Libre Restaurant & Rum Bar opened in Philadelphia in 2000, Atlantic City in 2004, Orlando in 2009 and Washington DC in 2010 to much acclaim, giving guests a passport to Cuba's intriguing flavors and culture. The restaurant’s name, which translates to “a free Cuba,” signifies a hope for the future of the treasured island nation. Pernot’s menus feature tantalizing tastes that reflect Cuba’s culinary traditions, as well as the emerging modern cuisine he experiences during his continuing travels to Cuba. For more information about Cuba Libre, please visit www.CubaLibreRestaurant.com.