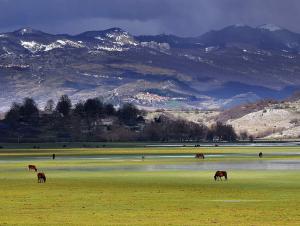 The valley below the village where hundreds of horses roam freely. 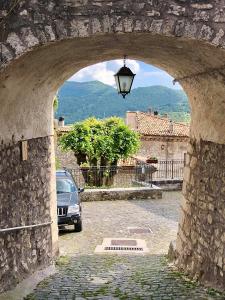 Medieval archway that served as one of the gates through the fortified village walls.l 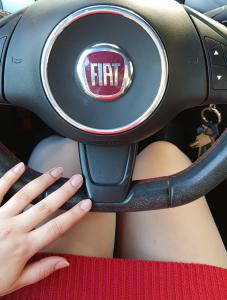 Fiat — a symbol of transition from a thousand years of agricultural labor to modern times.

Avoids the overwrought and saccharine nostalgia that occasionally mar books on the Italian-American experience. Even those not from… Italy, should still find the book enjoyable and informative.”
— Dr. Ray LaVerghetta, Abruzzo & Molise Heritage Society of Washington DC

SANTA FE, NM, UNITED STATES, December 1, 2019 /EINPresswire.com/ — For those who have an affinity for sunny southern Italy, the newest book from Via Media Publishing will draw your interest. Enthusiasts of Italian history, culture, and travel will find rich details throughout the pages of Mundunur: A Mountain Village Under the Spell of South Italy.

In standard Italian, Mundunur is commonly known as Montenero, an abbreviation of Montenero Val Cocchiara. Located on the border of Italy’s the Abruzzo and Molise regions, it seems to be a typical mountain village. However, it proves to be more than that. Mundunur offers an unusual perspective for readers. It is an interesting starting point for learning about the centuries of Molise history and its interrelationship with south Italy.

Certainly the village and its people retain unique traditions and character traits because of its relative seclusion. It functioned as an agricultural medieval village for over one thousand years. As fully revealed in this book—its history was tinted by contacts with numerous powerful groups over many centuries. Since Naples was the political and cultural heartbeat of south Italy, it sewed threads that tie Mundunur to a heritage common to all living in the south.

Author Michele DiMarco draws on a rich bibliography and from numerous sources of civil and ecclesiastical archives. He reconstructs Mundunur’s history from its origins to the present day. Given the absence so far of a historical monograph entirely dedicated to this community in the region of Molise, the resulting work fills a void in local historiography.
The volume unfolds in sixteen chapters. In the first three, the author illustrates the history of his family and the link with Mundunur and then reviews all the historical periods from antiquity to the present. He always provides the historical context, taking care to explain to a readership—which may not be very familiar with Italian history—the dynamics and historical processes that affected the history of southern Italy in past centuries.

A century ago Mundunur had a population of two thousand. Today the number of inhabitants is only slightly more than five hundred. The village is now in the process of redefining itself. The agricultural way of life has passed and people are either leaving the village or are hoping for new ways to be employed. Village residents are now in preparation and actively moving toward the future. It is logical that they develop work, such as geotourism, associated with the spended geographic setting and the fascinating breed of Pentro horse that has roamed the scenic valley for over two thousand years.

Many who have long since moved from Mundunur write that the old village is the best place in the world. Their warm and fuzzy sentiments are certainly fostered by heavy doses of nostalgia. However, things are not always the way they seem. There are good reasons why millions left south Italy and why Mundunur’s population today is one-fourth of what it was in 1900. History bears witness to the rough reality of Mundunur, Molise, and southern Italy.

Non-natives are having an influence, such as those from Rome and Naples who have purchased vacation homes in this tranquil setting. New homes are being constructed and wonderful medieval buildings are being refurbished. People with foresight have created new businesses in the village, including an agricultural museum and a yoga/tai chi retreat. Foreigners from Romania, India, the United States, Belgium, and elsewhere have taken up residence in Mundunur. They bring fresh energy and stimulating views. Their influx is not a totally new phenomenon. A millennia of migrations provided Italy with a good mix of DNA, reflected in every century of history. Montenerese may show traces of Greek, Spanish, Arabic, Germanic, and Nordic in their genetic makeup. As the newest members of the village, babies of varied genetic inheritance are learning to walk on the paths formerly used only by farmers and their donkeys.

Like birds in seasonal migration, expatriates return every summer to Mundunur, mostly from the United States, Canada, and a number of European countries. Many maintain ancestral homes here, so it is convenient for them to stay a month or two. Their presence doubles the population, bringing an international flair to every inch of the village. Over many decades, these foreigners have certainly enhanced and supported the village financially, culturally, and emotionally. More so, being infused by blood ties to the village, they have transferred cultural traits from Mundunur to many parts of the world.

People who have roots in the village are often inspired by the lives of their ancestors. By knowing the hardships of their parents, grandparents, and great-grandparents, they have become energized with a strong work ethic and a desire to not waste time with superficial distractions. In addition to the hard labor required to live in an agricultural village in the High Molise, ancestors experienced the horrors of war, poverty, famine, and earthquakes. Those of the younger generation, without awareness of their roots, have no clear vision for the future. Perhaps if families and friends talked more about ancestors and the past, they would understand the present better—and be inspired for creating the future.

Anyone with roots in south Italy will certainly benefit from reading this book. However, the author’s greater aspiration is that others will equally enjoy the story of Mundunur as a metaphor for their own ancestral village or town, regardless of country—or even see the village as a microcosm of the world, where the forces of history and culture forge the character of people. Hopefully this book will bring topics to the table for many stimulating discussions so more can appreciate their own heritage. Doing so may motivate us to regularly nourish the qualities in our characters that make us better human beings and a vital part of family and community.

The book can now be ordered through Via Media Publishing and Amazon websites.