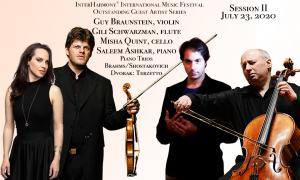 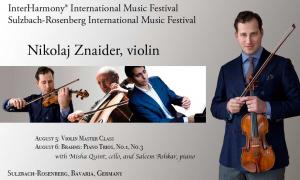 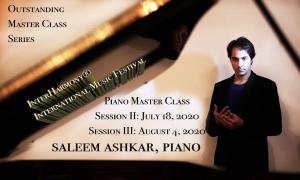 The Palestinian-Israeli musician [Saleem Ashkar] is a great poet on the grand piano.
His stream sounded clear and transparent, but not cool. His messiaen sensual and eruptive.”
— Marcus Stabler, Hamburg Abendblatt

DELRAY BEACH, FLORIDA, USA, February 19, 2020 /EINPresswire.com/ — After a tremendous performance with the InterHarmony Festival Orchestra last year, pianist SALEEM ASHKAR will enter the chamber music scene during the InterHarmony International Music Festival in Session II in Italy and Session III in Sulzbach-Rosenberg, Bavaria, Germany. He will join Guy Braunstein (violin) and Misha Quint (cello) for Brahms and Shostakovich trios on July 23 in Acqui Terme, Piedmont, Italy. He will perform in an evening of Brahms Trios with Nikolaj Szeps-Znaider (violin) and Misha Quint (cello) on August 6. Ashkar will give a Piano Master Class in both sessions as a part Outstanding Masterclass Series at each festival. www.interharmony.com

Based in Berlin, the Israeli-Palestinian pianist has become one of the most in-demand soloists of our time. Saleem Ashkar performs regularly with such conductors as Zubin Mehta, Riccardo Chailly, Christoph Eschenbach, Riccardo Muti and Daniel Barenboim, and with many of the world’s leading orchestras, including the Vienna Philharmonic, the Staatskapelle Berlin, the Filarmonica della Scala, the Concertgebouw Amsterdam, the London Symphony Orchestra, the Leipziger Gewandhaus, the NDR Hamburg, the DSO and the Konzerthausorchester in Berlin.

Violinist GUY BRAUNSTEIN started performing as an international soloist and a chamber musician at a young age and was the youngest concertmaster of the Berlin Philharmonic. He has performed with the Israel Philharmonic, Tonhalle Zurich, Bamberg Symphony, Copenhagen Radio and Frankfurt Radio Orchestras, as well as the Filarmonica della Scala, Berlin Philharmonic, among others. He has collaborated with musicians such as Isaac Stern, András Schiff, Zubin Mehta, Maurizio Pollini, Yefim Bronfman, Daniel Barenboim, Sir Simon Rattle, Lang Lang, Emmanuel Ax, and Semyon Bychkov to name a few.

NIKOLAJ SZEPS-ZNAIDER is the most celebrated performer of our time with recent and forthcoming highlights with the Chicago Symphony, Cleveland Orchestra, New York Philharmonic, Dresden Staatskapelle, and the Stockholm, Brussels, and Oslo Philharmonics. As a conductor, Szeps-Znaider is Music Director of the Orchestra National de Lyon and is Principal Guest Conductor of the Mariinsky Orchestra.

ABOUT INTERHARMONY INTERNATIONAL MUSIC FESTIVAL
InterHarmony® International Music Festival takes place each summer in Acqui Terme, Piedmont, Italy, and Sulzbach-Rosenberg, Bavaria, Germany. It combines multiple concerts of world-renowned soloists and chamber musicians, at the same time providing intensive study programs for young musicians, helping them to climb the steps to world stages of classical music. As part of the Outstanding Guest Artist Series, participants will be brought together with some of classical music's brightest lights, who will perform and give masterclasses. https://www.interharmony.com/