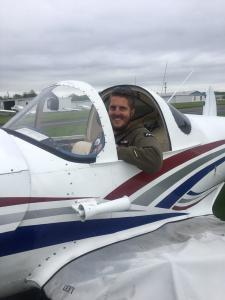 Now out of production for half a century, the Engineering and Research Corporation Ercoupe was a civil aircraft market super-success in postwar America. One of a number of vintage airplanes today coveted by enthusiasts, ERCO Ercoupe owner Samuel Brozina, from Millville, New Jersey, explains more as he continues to delight in his passion for aviation.

"Something of a rarity among more modern civil aircraft such as Cessnas and Pipers, today, vintage airplanes are in big demand," explains Brozina, a licensed pilot. Samuel is also the proud owner of his very own ERCO Ercoupe, a low-wing monoplane aircraft designed and built in the United States until the start of the 1970s.

Subsequently out of production for some 50 years, Samuel Brozina is among the latest individuals to get his hands on an ERCO Ercoupe. "Today a rarity with fewer than 1,000 ERCO Ercoupes still registered to fly in the U.S., even among fellow pilots and aviation enthusiasts, the most common question I'm asked about my own airplane is, 'So, what exactly is it?'" reveals Samuel Brozina, clearly amused by the puzzled expressions often met in response to his rare vintage airplane.

First manufactured by the Engineering and Research Corporation shortly before World War II, following the war, several other manufacturers subsequently continued its production until 1970. "It was in the late 1960s that the bottom started to fall out of the civil aircraft market," suggests Ercoupe expert Samuel Brozina, "ultimately putting an end to the production of the now increasingly rare airplane as a result."

Marketed in its day as the future of personal travel, as well as claiming to be the world's safest plane, peak ERCO Ercoupe sales reached more than 6,000 annually. "Now, however, less than 2,000 survive," explains Samuel Brozina, a fan of the fixed-wing aircraft since childhood, "with more than half of those sadly no longer registered to take to the skies."

Samuel Brozina, who holds a private pilot's license, says he's always been a particular admirer of World War II-era warbirds. In something of a case of good fortune, Brozina's own vintage aircraft came from a seller in Quakertown, Pennsylvania, less than 100 miles away from his Cumberland County home in Millville, New Jersey.

Such a fan of the Engineering and Research Corporation is Samuel Brozina that the pilot has even commissioned a one-of-a-kind ERCO jacket patch since purchasing his own plane. Designed especially and manufactured as just one-of-one, more generally, jacket patches and pilots, Brozina says, go together like bread and butter. "As a pilot, I'm no exception!" he suggests.

"A lifelong aviation enthusiast and a particular fan of World War II warbirds, it's incredibly nice," adds Samuel Brozina, wrapping up, "to finally own my own piece of aviation history from this fascinating period in time."