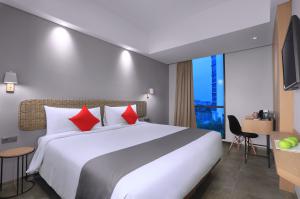 Archipelago International continues the expansion of its innovative and highly popular Hotel NEO brand with the opening of Hotel NEO Puri Indah in Jakarta.

Our latest addition is a great fit in the vibrant Puri Indah neighborhood with its many attractions and shopping options nearby. Stay tuned for more future NEOs opening near you.”
— John Flood

The new NEO comes with 96 open-space, uncluttered guest rooms, each featuring LED TVs with international & local channels, workstations with universal outlets, a mini-fridge, tea-coffee makers and ensuite bathrooms. A casual restaurant and a swanky rooftop lounge with live music add to the exciting offerings, while business travelers will appreciate the two modern meeting rooms that can be combined into one.

‘NEO is probably one of the most misunderstood hotel brands in the market, which in itself is a key unique selling point. While this may sound contradictory, it’s pretty simple: The brand is purposely ‘mispositioned’ within the typical hotel classification, making it an attractive choice near both ends of the price spectrum. What’s more, it is a ‘modernistic’ hotel, a place with a modern and futuristic narrative. A visionary, imaginative brand, that creates curiosity and dreams. One NEO trademark is the convenient and popular location and with that in mind, our latest addition is a great fit in the vibrant Puri Indah neighborhood with its many attractions and shopping options nearby. Stay tuned for more future NEOs opening near you.’ says John Flood, President & CEO of Archipelago International.

About Archipelago International
Archipelago International operates Indonesia's largest portfolio of over 150 hotels with a further 50+ currently under development across Southeast Asia, the Caribbean and the Middle East. With 20,000 rooms in more than 60 destinations, the Group's high-end to budget brands include ASTON, The Alana, Collection by ASTON, Huxley, Kamuela, Harper, Quest, NEO, favehotels and Nomad.