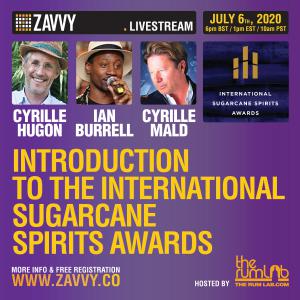 SEATTLE , WA, UNITED STATES, June 29, 2020 /EINPresswire.com/ — The International Sugarcane Spirits Awards (ISS Awards) is a promising new competition aiming to become the world’s leading authority on sugarcane spirits. With leadership from Ian Burrell, Cyrille Hugon, and Cyrille Mald, the competition brings expertise from both the Paris and UK Rum Festivals. Add in a global lineup of stellar judges, and rum brands and consumers can expect an honest evaluation of sugarcane spirits.

Federico Hernandez, partner at TheRumLab.com and Zavvy.co Network, has added both platforms as official media sponsors of the ISS Awards.

“Ian shared the idea of creating this type of spirit competition, with top-notch judges from around the world who can provide authentic evaluations. We at Zavvy and TheRumLab are very happy to know that Cyrill Hugon, Cyrille Mald, and Ian Burrell partnered to take on the mission of establishing and executing it,” he said.

On July 6, 2020 (6pm BST), Zavvy and the ISS Awards will host a livestream event to unveil the full details of the competition and explore its lineup of judges. You can register to attend free at Zavvy.co