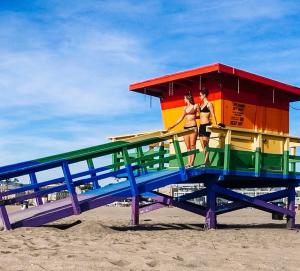 The Virtual Pride event held Sunday was created as an alternative to the hundreds of physical parades that were canceled or postponed due to the Pandemic.

NEW YORK, NY, USA, July 1, 2020 /EINPresswire.com/ — The inaugural Virtual Pride event took place on June 28 as virtual celebrants interacted with Tweets, photos, and videos from 28 Pride organizations across the United States. The date (June 28) and the number of Pride organizations (28) were selected to commemorate the 50th Anniversary of the first Pride March that took place on June 28, 1970.

The five-hour event generated over 14 million impressions on Twitter. It was hosted by GayTravel.com, a company whose vision for over two decades has been “a world where the global LGBTQ+ community can travel freely without prejudice, hate, or discrimination.” Celebrants would normally line the streets of pride parades across the country. Instead, they interacted with tweets, images and videos provided by Influencers, LGBTQ+ supportive businesses and Pride organizations from New York to San Diego and Alaska to Hawaii.

“Celebrating Pride this year has been challenging because we’re unable to be physically close. Yet the spirit of Pride and equality has never been more significant, especially given the recent U.S. Supreme Court's historic decision to protect LGBTQ rights in the workplace. Virtual Pride provided a platform enabling the community to remain visible and to be heard from their homes,” said Sam Barreto, Social Media Chair at GayTravel.com.

Originally designed as a replacement for physical prides, VirtualPride.com is now being contemplated as an adjunct to future physical prides. The virtual format enables Pride organizations to interact and amplify each other’s inclusive messages in real-time.

About GayTravel.com
For over two decades, GayTravel's vision has been "a world where the global LGBTQ+ community can travel freely without prejudice, hate, or discrimination." GayTravel serves as a trusted resource for LGBTQ+ travelers and connects them with inclusive and welcoming travel brands and services.

About VirtualPride.com
Virtual Pride was launched to create an online replacement for the LGBTQ+ community due to the cancellation and postponement of most of the physical Pride events in 2020. The inaugural event took place on June 28, 2020, to commemorate the 50th Anniversary of the First Pride March held one year after the Stonewall Uprising in NYC. VirtualPride.com and #virtualpride on Twitter.

Contact Sam Baretto at sam@gaytravel.com for an interview or photo opportunities.