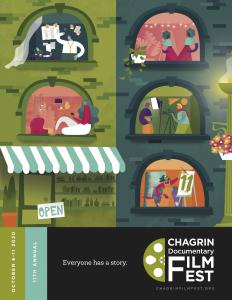 CHAGRIN FALLS, OHIO, UNITED STATES, July 6, 2020 /EINPresswire.com/ — The show must go on! The Chagrin Documentary Film Festival (CDFF), one of the top documentary film festivals in the country, has announced their most creative film festival yet. Adapting to the constantly changing social distancing guidelines, CDFF has created both an in-person and an online streaming Festival to provide the best in documentary film to the audience members across Northeast Ohio and the US. The National Endowment for the Arts announced a special $50,000 grant for CDFF on June 30 in support of the Festival’s commitment to bring people together in unique — and safe — ways.

Adhering to CDC guidelines, and the safety and comfort of festival goers, the festival, which is located in Chagrin Falls (right outside of Cleveland), has designed two outdoor venues consisting of an LED screen in Riverside Park and an adapted Drive-In location in Chagrin Falls Village. Membership packages this year include perks such as Drive-In Docs reserved parking, Films in the Park, Fest to Go boxes and extended CDFF On Demand streaming which allows members full access to films from the comfort of their own home. The 11th annual festival will take place October 6 — 11.

“The Chagrin Documentary Film Festival is needed more than ever in our community,” said William Tomko, mayor of Chagrin Falls. “This Festival brings in much needed stimulus to our restaurants and merchants and, more importantly, also brings us together to discuss important topics in divisive times.”

Members will get special access to online and in-person films, the inside scoop, and many other benefits all while contributing to the sustainability and legacy of this very special event. The Chagrin Documentary Film Festival has continued to grow in attendance, seeing an audience of 13,000+ in 2019 and being named to MovieMaker Magazine’s “Top 50 Festivals Worth the Submission Fee” for the 8th consecutive year.

Earlier this year, CDFF announced a new partnership with Gravitas Ventures to benefit documentary filmmakers and further their shared missions of promoting the art of documentary film by guaranteeing distribution to the winners of two categories at this October’s festival. Adding to the list of perks for filmmakers, CDFF recently partnered with PopDoc to help filmmakers expand the audience of their documentary shorts. PopDoc will select 5 CDFF short films to award a paid social media advertising campaign, interviews on the PopDoc Podcast and will be screened for a live audience on their Live Stream.

The Festival draws audiences from all over Northeast Ohio, the U.S. and the world to experience documentary films and the compelling art and culture they highlight. This year’s Festival has received additional grant support from Ohio Humanities.

The full schedule and individual tickets will be available in early September.