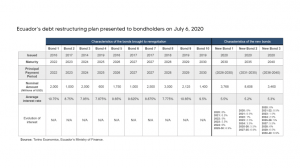 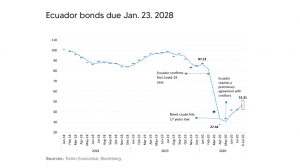 NEW YORK, NY, UNITED STATES, July 7, 2020 /EINPresswire.com/ — In principle, Ecuador has reached an agreement with an ad hoc group of bondholders on the commercial terms to restructure around USD 17.4bn in the country’s bonds.

In this regard, Ecuador's government was able to postpone the payment of 75% of the debt (USD 12,066 million) until after 2030. Regarding the payment of interest, these will be annually and at different rates every year. The interest rate associated with these payments would be between 5.2% and 5.5%.

This agreement is expected to be the final step in a process that began on March 24th, 2020, when Ecuador launched a consent solicitation to defer interest payments due between March 27th and July 15th, 2020, to August 15th, 2020.

The country needs the approval and support of a broader community of bondholders to consummate this final step successfully.

If this proposal is approved, Ecuador will get significant liquidity relief to face the current crisis, and the external debt will be sustainable in the medium term, which will pave the way for strong and long-lasting economic growth.

The government's expectations are: 1. obtain a substantial debt relief exceeding USD 10bn over the next four years, and USD 6bn more between 2025 and 2030; 2) a 42% reduction of Ecuador's average contractual coupon rate to 5.3%; 3) to double the length of the yield curve from 10 to 20 years, and 4) achieve a nominal haircut of 9%.

The magnitude of relief

Thanks to the renegotiation process, there will be a relief of the payment of external debt for USD 16,452 million over the next ten years, at least USD 11,000 million until 2025 and the rest until 2030. This year, nothing more will be paid than what has already been disbursed, thus saving USD 1,361 million. In 2021, USD 79 million will be disbursed for interest.

Regarding the term, the period for the existing debt will be doubled. In this sense, the maturity of the bonds will go from a weighted average of 6.1 years to 12.7 years.

Regarding the interest rate, the Minister indicated that it would decrease from 9.2% to 5.3% on average. The highest current interest rate is 10.75%, while with the restructuring process; the interest rates will go from 0% to a maximum of 6.9%. Finally, the grace period will be extended by five years for capital.

Gerry Rice, a spokesperson for the International Monetary Fund (IMF), said that the restructuring process of Ecuador's global bonds "is progressing in a timely and constructive manner." This appreciation arises from the agreement in principle reached by the Ecuadorian authorities and a large group of creditors, Rice said.

The Minister of Finance, Richard Martinez, clarified that this bond renegotiation process does not cancel or replace the country's financial negotiations with China, with which the country would obtain USD 2.4 billion at 6% and a 9-month grace period, and would not substitute the IMF loans either. The bondholders involved in this negotiation is an ad hoc group representing almost 50% of the total, which is positive, said the Minister during a press conference.

The guarantee that this payment plan can be fulfilled is fiscal responsibility if it maintains fiscal order and consolidation. Interest negotiated in 2020 totals USD 911 million, which will be paid in 2026 in five parts of USD 182 million each.

The country will continue working to cover financial needs (6% of the GDP), through multilateral agencies, such as governments (China) and other sources that may be obtained in the future. It will also continue to work on domestic debt.

You can also read this report in PDF version here