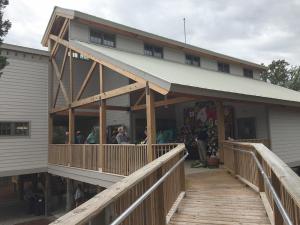 The new center offers a touch tank with ocean animals such as stingrays and horseshoe crabs, interactive activities and animals at the park

MURRELLS INLET, SC, US, October 14, 2020 /EINPresswire.com/ — Four years after it was destroyed in an early morning blaze, Huntington Beach State Park’s Nature Center is back open.

Officials celebrated the diversity of the park’s wildlife — showcased in exhibits inside the center, built in the same location as the one destroyed by fire.

“Originally opened 23 years ago, the Nature Center has served as a nexus here at the state park,” said Duane Parrish, director of South Carolina Department of Parks,  Recreation and Tourism. “It is a place that has helped connect our visitors who come to the park, and it has taught visitors how to be good stewards of the environment.”

The new center offers a touch tank with ocean animals such as stingrays and horseshoe crabs, interactive activities that educate people about the ecosystems and animals at the park, large reptile tanks that hold snakes and lizards native to the area, and a large movie screen for presentations. Funding for the Nature Center was made possible through a collaboration between SCPRT, Friends of Huntington Beach State Park, park officials and corporate partners: AVX Corporation and the Frances P. Bunnelle Foundation.

“It is a tremendous relief to have the new Nature Center open,” Park Manager Brenda Magers said after the ceremony. “It’s exciting that we can get back into the business of offering people this amazing place where they can get oriented to the park and learn about animals that they may not even see during their visit.”

She gave the example that people can see and touch a stingray or a horseshoe crab in the touch tank, but it is unlikely that they would see those types of animals while walking the beach. And they can get up close and personal with an alligator at the Nature Center but would not want to go near one outside.

“You can see it, you can learn about it, and you can maybe touch it,” Magers said. “That has just been a key element that has been missing here for a while.”

Paul McCormick, director for the South Carolina State Park Service, agreed, saying the Nature Center will be the hub of activity at the park. “One of the things that is exciting about this, is that as a rebuild of an old nature center we know what we have and we know how much it is going to be used and loved,” he said. “So we know we are providing a service that people want when they come here.”

He also said the purpose of the facility is to introduce people to the outdoors before they experience it themselves.

“You can learn about bird watching, shell collecting, and all of the different environments we have at the park, in this building,” McCormick said. “Then you can step outside and explore!”

It’s been a long wait for a new center to open as more than four years have passed since the early morning fire that destroyed the original facility. It was on July 20, 2016, when, after being struck by lightning, that the three-story center was quickly engulfed in flames. More than 20 animals, including snakes, amphibians, several fish and alligator hatchlings, were killed in the fire. There were no birds or mammals housed at the center.

The wait for the return of the popular park attraction to re-open has been longer than anticipated, due to storms that forced the reallocation of state resources and, most recently, the COVID-19 pandemic.

But it’s been worth the wait – longtime and new visitors to the park said.

“It is beautiful, and I’m so glad they rebuilt it,” Kay Boyce said. “It was a sad ending to the other one, but this is a nice facility.”

Don Boyce said he always enjoyed the Nature Center at the park.

“It’s awesome to get it back, rebuilt,” he said. “We have always enjoyed it here, and this is just an added benefit for the children and grandchildren when they come here with us, so they can look at the exhibits.”

Eve Armstrong of Virginia and Trevor Mayes of New Hampshire were camping at the park for the first time. They found out the day of the event that the new Nature Center opened.
“It is super cool,” Armstrong said.

Mayes agreed, saying, “It is awesome!”