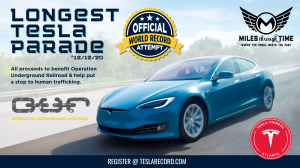 We're going to break the current record for the Longest Tesla Parade and raise funds for O.U.R. while we're at it.

If we're going to break a world record. let's do it so it means something.”
— Sean Mathis, Founder Miles Through Time Automotive Museum

SANDY SPRINGS, GEORGIA, UNITED STATES, October 14, 2020 /EINPresswire.com/ — JOIN US IN SETTING A WORLD RECORD
You can be a part of setting a Guinness World Record and help raise awareness to fight human trafficking. All proceeds generated by this event will go to Operation Underground Railroad.

This event is organized by Sean Mathis, the Founder of Miles Through Time Automotive Museum in conjunction with the Tesla Owner’s Club Atlanta. If you have a Tesla you are invited to join us!

All we need to do to beat the current world record and take the title from China is to have more than 145 Tesla’s participate in the parade. The goal will be to annihilate this record with more than 300 Teslas. And you can be a part of it.
Register here so we can start getting an idea of how many Tesla’s to expect and which models.

ALL PROCEEDS GO TO OPERATION UNDERGROUND RAILROAD
When we started this Guinness World Record attempt, it was just about the record. Then, we realized we could make this about so much more.
Operation Underground Railroad was in our thoughts already, as over 35 children were just rescued here in Georgia. Sean, the founder of Miles Through Time, and his wife Torie Mathis have always been advocates for children and animals, as they can’t fight for themselves.

DONATIONS AND SPONSORSHIP OPPORTUNITIES
We are accepting donations and sponsors to help raise funds for Operation Underground Railroad to support the rescue of human trafficking victims around the world.

All proceeds will go to O.U.R. and are tax-deductible.