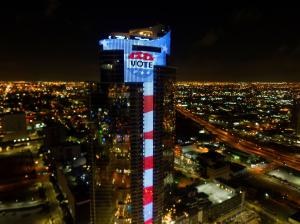 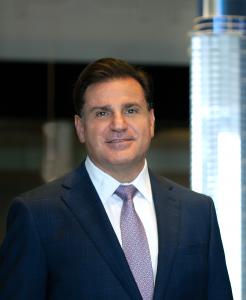 We are sending-out a signal to Florida’s 14-million registered voters urging them to participate in our democracy by casting their ballots.”
— Daniel Kodsi, CEO-Developer, Paramount Miami Worldcenter

The tower lighting occurs on the Wednesday evening prior to; and on the Thursday evening of President Donald Trump's campaign visit to Miami and when Vice President Joe Biden is appearing at a town hall meeting that same night in Philadelphia.

Thursday, October 15, is the date when both presidential candidates were supposed to attend their second debate in Miami. The debate was cancelled due to coronavirus concerns.

Now the candidates are both on-the-campaign-trail and the spotlight is on the battleground states of Pennsylvania and Florida.

“We are sending-out a signal to Florida’s 14-million registered voters urging them to participate in our democracy by casting their ballots.”

It is the 700-foot, 60-story, $600-million luxury centerpiece superstructure of Miami Worldcenter.

The building will illuminate every half-hour for a duration of five-minutes.

The 10-story crown of Paramount Miami Worldcenter is now glowing with a 150-foot-tall by 300-foot-wide fluttering field of blue, blended with a mosaic of five-pointed white stars and a 300-foot-in-diameter VOTE lapel button image.

Through the center of the building is a 693-foot-tall vertical stream of L.E.D. red and white stripes combined with the words, “VOTE FLA.”

The Miami Worldcenter construction site is one of South Florida’s largest employers.

Since its 2015 groundbreaking, more than 10,000 construction workers have been transforming a 27-acre landscape, once littered with decaying warehouses, into “America’s City-within-the-City-of-the-Future.”

About the Animation System

“There are 14,300 individual light emitting diodes embedded in more than 10,000 panes of high impact glass on Paramount Miami Worldcenter,” explains Kodsi. "The lighting system requires 15,000 watts of electricity, which can create a combination of 16.2-million colors. It took three years to design the system and took a team of 12 technicians, 10-months to install it."

To date, two buildings and the rail terminal have been completed. Three other buildings are under construction. Two other structures plan to break ground
later this year.

Many of the construction workers were unskilled people recruited from the community. They were provided on-the-job training and paid at least twice the state's minimum wage and given benefits. Many of those people have gone on to higher paying tradesman, journeyman and skilled worker status.

He has created more than 40 major residential and mixed-use projects, employing tens-of-thousands of people across the State of Florida.

Kodsi is Managing Principal of the Royal Palm Companies, which is considered one of Florida’s most-prestigious and respected real estate development and capital finance firms. Its portfolio of past, present and future projects exceeds $5-billion.

Kodsi is a seasoned expert in architecture, construction, finance, and real estate development. He has appeared on a wide-array of domestic and international television news channels and in the Wall Street Journal, New York Times, Washington Post, USA Today, Miami Herald and Sun Sentinel.