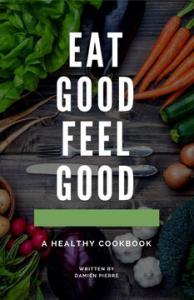 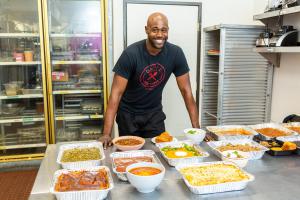 The eBook is a collection of healthy recipes that provides readers with increased knowledge about healthy food choices that fit into any diet or meal plan.

The choices we make when it comes to meal planning have a correlation with how we feel. That is what Eat Good, Feel Good is all about.”
— Damien Bernard Pierre

"The world is a huge place. When I started my company in 2015, I knew I wanted to reach many people through food, communication, and language, which is powerful,” said owner Damien Bernard Pierre.

Pierre said Americans are in the midst of a major cultural shift when it comes to food and food preparation.

“With the pandemic, everyone has been forced to start cooking at home more often. This isn’t a trend, this is a major shift,” he said.

A July study by Bloomberg News and Morning Consult found that nearly a third of U.S. adults plan to cook at home more than they do now once stay-at-home restrictions are lifted.

The survey of 2,200 US consumers found that the intention to keep up with home cooking is especially strong among younger demographics. When asked about their post-pandemic plans, a full 43 percent of Gen Z respondents said they intend to cook at home more after the pandemic is over.

As a result of people logging more hours in the kitchen, grocery retailers are seeing shopping habits shift to accommodate different types of cooking.

Companies like Dami’s Famous Foods look to capitalize on the shift. Pierre’s eBook is aimed at people who plan more frequent meals at home and want to do it in a healthier manner.

Eat Good, Feel Good is a collection of healthy recipes that provides readers with increased knowledge about healthy food choices and options that fit into any diet or meal plan. The eBook is available in English and Spanish.

“The choices we make when it comes to meal planning have a correlation with how we feel. That is what Eat Good, Feel Good is all about,” he said.

If Pierre looks familiar it is probably because of his Food Channel “Bachelor Cook TV” on YouTube or his weekend presence at the Brentwood Farmer’s Market Sundays from 9 -2.

Pierre was born in Brooklyn and raised in Port Charlotte, Florida. He credits his Caribbean roots for the fusion twist in his cooking.

"I cook with an assortment of Caribbean spices that add great flavors to foods and leave your mouth satisfied. My food will spice up your palate, and spice up your life," says Pierre.

Pierre graduated from AIU in Atlanta before relocating to Los Angeles to pursue a career in the production and hospitality industry.

Pierre also has an online store at www.damisfoodsstore.com where he sells his original recipe barbecue sauce, Dami’s Famous BBQ Sauce.

Dami’s Famous Foods opened in April 2016 in Los Angeles and has quickly established itself as the go-to place for gourmet chili and other dishes with a fusion twist. You can find more information at www.damisfoods.com and follow Dami’s on social media at the following locations: Facebook: @damisfoods; Twitter: @damisfoods; and Instagram: @damisfoods.