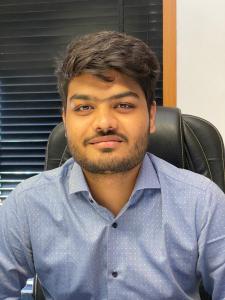 In the fastest growing StartUp hub in the world, the young generations are taking great initiatives by coming up with innovative ideas to fuel the Economy.

NEW DELHI, DELHI, INDIA, January 12, 2021 /EINPresswire.com/ — When we talk about Dynamic,Creative and Innovative, this clearly means an entrepreneur who is with a great mindset of building the system better than the best, shaping up an idea which sometimes was in their mind and to pen it down on a paper to building the right infrastructure to making it reachable to hundreds of thousands of people. Great Minds always discuss Ideas with Greater Minds and there is absolutely No Doubts. In the early era of Mobile Applications when they were first published by Apple on their AppStore, it was a time when new minds started to come up on the platform bringing some of their ideas which can fulfill the need of Smartphone users not by going on the Web browser of their Computers but by installing an application right in to their Smartphone and operating everything of their need just with a single click from wherever they’re.

Smit Sonani, a Young, Dynamic Graduate from Unitec Institute of Technology, Aukland, New Zealand in the year 2014, is one such example who looked at the issues that any user may face in their daily life for their regular commute.

We see many big problem wherever we travel all around the World, no matter if it is United States, Canada, United Kingdom, India, Australia, China or even in New Zealand, most problem always starts when we're in a hurry, when we’ve to reach our meetings or start our day early, or even we are getting late to start our job, this problem has taken many opportunities; if someone is attending their life changing opportunity just imagine no one can do anything about this as the system around the World is developed in such way.

While his period of studies in New Zealand, such problems were obvious to be faced number of times, missing the Bus or a public commute to reach college collage on time and sometimes it happened he had to skip important classes, even you call a Cab, it may not arrive on time and it starts falling in a huge mess. He kept thinking about finding the right solution for this, as it was about never getting to settled in New Zealand but while returning back to India, his home Country where he was Born and Raised. Here, millions of people who are facing problems and taking it as a challenge every single day. A country which is full of opportunities, but with lower infrastructure of proper transportation and lack of traffic knowledge, an idea popped in his mind – how can we save the time of people and their ideas, and make it reach to a right point when and wherever it is needed on time. After all it was about how we should believe in the capabilities of what we can do and creates, as our history is rich with culture, innovation and respect for over thousands years.

After returning back to India, "I joined my father’s business in Diamonds, but my mind was still stuck to one point which I always wanted to do for the people of my own Country. They’re all for me, if I can do something for them, my idea and my time spent is worth living every moment. I decided to come up with an idea of providing Premium Cab service and Carpool which was at an early stage of rising concept in India. At the time when other International Brands started to operate in India, there was a massive concern of security and the highest amongst was Women safety which became a biggest concern. I then started to work on idea of building the right Commute system which can fulfill the need of every Indian with safety, security and service On Dot. I decided to start an On Call Cab Service as “Coop Cab” a service which is on the dot with an extensive service and integrated safety for all of our passengers. Before our initial launch started from New Delhi, we went to multiple check of all our features we were going to offer to our esteemed passengers who were soon to be converted as our regular users and for our Drivers & Ride partners with whom we were to deal on a daily basis. It was our priority to keep everyone happy at the same time and these things can only lead a company to a newer heights."

Soon after launching our service from New Delhi, especially in On Call Cab services, it was an opportunity for for Coop to serve one more city from where he belongs to, it was Surat. Coop launched in Surat and the response was tremendous from the users & drivers as the company was local, friendly, customers & driver centric who really focused on how well their users and drivers can be treated better compared to any other services which was available in the market. Happy Customers, Happy Drivers makes an On Call Cab Services to reach new heights quickly. The generation today knows what is the real demand of people and how their problems can be shorted out, top was No Price Surge and no Higher Commission which can be an extra burden. This moved to an added heights, this allows to gain more numbers and reach the in-depth of an area where real market penetrations needs to be done.

Right before the Lockdown started in India, this has played major role for almost every young Indian entrepreneur who always wanted to take their start-ups to a new level, smartly they've taken an extra benefit of this situation soon after Lockdown started to get lifted where most ventures have gained amount of huge response just because they've tried to involve maximum number of users during this period of time in India. It helped them a lot as most of their users wanted to take a try of the services they got involved during this time.