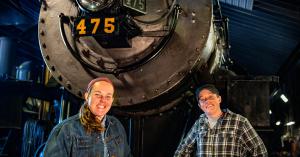 I’m proud to be alive in an era where merit and advancement are based on skill and not gender. I have worked hard to prove myself as an equal to others in the railroad industry.”
— Andrea Biesecker

STRASBURG, PA, USA, March 3, 2021 /EINPresswire.com/ — For the first time in its 189-year history, Strasburg Rail Road announces the first-ever all-female crew to operate the historic steam engine, hauling passengers on a 45-minute trip to Paradise, PA, and back. The milestone comes as the railroad prepares to celebrate International Women’s Day on Saturday, March 6, 2021. To mark the accomplishments of women within the railroading industry, Engineer Andrea Biesecker and Fireman Shelley Hall will serve as the Engine Crew on all excursions. Trains depart at 11 am, 12:30 pm, 2 pm, 3:30 pm, and 6 pm.

International Women’s Day (IWD), officially recognized on March 8th, is a global day designated to celebrate women’s achievements, raise awareness about women’s equality, lobby for accelerated gender parity, and fundraise for female-focused charities. In essence, IWD is a rallying cry for all to choose to challenge and call out gender bias and inequality.

Andrea Biesecker, who joined Strasburg Rail Road’s mechanical team in 2009, credits her success to drive, determination, and a love of all things steam.

“I’m proud to be alive in an era where merit and advancement are based on skill and not gender. In a male-dominated industry, I have worked hard to prove myself as an equal to others in the railroad industry. I am honored to be the first female machinist, first female engineer, and now to be part of the first all-female crew to operate Strasburg Rail Road’s steam locomotive.”

Shelley Hall holds claim as the first female welder at the railroad. As a certified pressure vessel welder, Hall is skilled at welding on steam locomotives, which has given her opportunities few women have had.

“I worked hard to become a welder and a fireman for the railroad. Working in a male-dominated field is not easy and sometimes you have to work harder because it's not a given that you know what to do because you're a woman. But it is worth it because I get to do what few women do for a living. Borrowing a quote from Tom Hanks in A League of Their Own, ‘It's supposed to be hard. If it wasn't hard, everyone would do it. The hard is what makes it great.’ ”

Hall and Biesecker say one of the biggest rewards of being part of the first all-female engine crew is the message it sends to young girls. “This is a great opportunity for young girls to see women doing a job that they could do one day," says Hall.

In addition to the mechanical services, Strasburg Rail Road Company operates two other business units, guest services, and dining. Currently, there are 9 full-time and 26 part-time women employed at the company.

Founded in 1832, Strasburg Rail Road is one of Pennsylvania’s leading family attractions and is home to museum-quality, working, turn-of-the-century steam locomotives, freight cars, dining cars, private cars, and one of the largest fleets of historic wooden passenger cars in the world. For more information on the Strasburg Rail Road, visit StrasburgRailRoad.com.