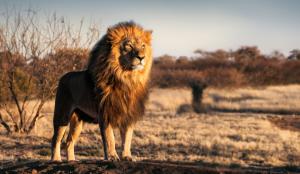 We don’t allow trophy hunting of threatened and endangered wildlife in the U.S., and we should apply that same standard when it comes to imports of foreign-listed species targeted by trophy hunters.”
— Wayne Pacelle, president at CHE

WASHINGTON, DC, UNITED STATES, May 2, 2021 /EINPresswire.com/ — Calling for “the ending of certain inhumane and irresponsible practices that greatly harm the reputation of South Africa and the position of South Africa as a leader in conservation,” the nation’s top environment official announced today that she is recommending an end to trophy hunting of captive lions and commercial cub petting. South Africa’s Environment Minister Barbara Creecy has aligned herself with the majority recommendation of a 25-member panel formed in 2019 to examine those issues and other critical conservation topics, signaling a startling shift in national policy that has allowed the extreme exploitation of thousands of captive lions in fenced enclosures. The Center for a Humane Economy wrote to Minister Creecy as recently as early February urging the set of actions she announced today.

“Minister Creecy has called for a ‘New Deal’ for wildlife, and that is precisely what she will deliver if her wishes are put into law,” said Jennifer Skiff, director of international programs for the Center for a Humane Economy and Animal Wellness Action. “South Africa is on the cusp of putting an end to the disgraceful slaughter of captive lions for their heads, bones, and tawdry cub petting operations, and it is a joyous prospect.”

In South Africa, private operators abuse lions during their entire life cycle — keeping them captives and exploiting them for cub-petting, lion-walking, and ultimately, trophy hunting. These “farms” long enabled the mass production of lions in barren, factory farm conditions to supply an insatiable appetite for bones in China for folk medicines, foreign trophy hunters, and unwitting tourists who patronized the farms and perpetuated the life cycle of cruelty with their payments for these commercial opportunities.

“The panel recommends that South Africa does not captive -breed lions, keep lions in captivity, or use captive lions or their derivatives commercially,” wrote Creecy. “I have requested the department to action this accordingly and ensure that the necessary consultation in implementation is conducted.”
Along with a range of other non-profit animal welfare and conservation groups, the Center for a Humane Economy has been urging South Africa to choose eco-tourism to bolster its economy instead of this multi-dimensional exploitation of lions.

The Center is pushing in the U.S. Department of the Interior for a complete ban on any imports of sport-hunted lions and also for passage of the Big Cat Public Safety Act, H.R. 263 and S. 1210, which would stop their exploitation for cub petting at roadside zoos and shut down the transport of big cats for the pet trade. These policies should shut down the stream of cats who grow up quickly, become too dangerous for private citizens to handle, and often discarded, perhaps for the bone trade and for canned hunts.

“We don’t allow trophy hunting of threatened and endangered wildlife in the U.S., and we should apply that same standard when it comes to imports of foreign-listed species targeted by trophy hunters,” said Wayne Pacelle, president of the Center for a Humane Economy. “The U.S. and South Africa may now be on the same path to lion protection.”

Lions have vanished from 95% of their historic range in the last 100 years, with perhaps only 20,000 remaining in the wild. Most imports of lion trophies from South Africa did stop coming into the U.S. after the 2016 action by the U.S. Fish and Wildlife Service to provide Endangered Species Act protections for African lions.

The panel also recommended a new direction when it comes to South Africa and the trade in ivory and rhino horn, with South Africa long playing a role in promoting the trade. “We have accepted that the country adopt the recommended positions on ivory and rhino horn trade, such that we will not be making proposals to CITES for further trade in these derivatives until certain conditions have been met,” wrote Minister Creecy in her lengthy statement.

The Animal Wellness Foundation (Foundation) is a Los Angeles-based private charitable organization with a mission of helping animals by making veterinary care available to everyone with a pet, regardless of economic ability. We organize rescue efforts and medical services for dogs and cats in need and help homeless pets find a loving caregiver. We are advocates for getting veterinarians to the front lines of the animal welfare movement; promoting responsible pet ownership; and vaccinating animals against infectious diseases such as distemper. We also support policies that prevent animal cruelty and that alleviate suffering. We believe helping animals helps us all.

The Center for a Humane Economy (“the Center”) is a non-profit organization that focuses on influencing the conduct of corporations to forge a humane economic order. The first organization of its kind in the animal protection movement, the Center encourages businesses to honor their social responsibilities in a culture where consumers, investors, and other key stakeholders abhor cruelty and the degradation of the environment and embrace innovation as a means of eliminating both.