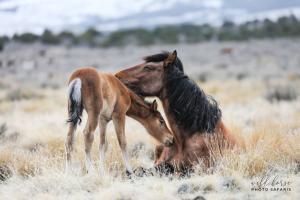 I call on the Bureau of Land Management to leave the Onaqui horses on the land, manage them humanely with fertility control, and limit livestock grazing to protect the ecosystem.”
— Katherine Heigl

SALT LAKE CITY, UTAH, USA, June 17, 2021 /EINPresswire.com/ — Today, actress Katherine Heigl, joined by Animal Wellness Action, Center for a Humane Economy, the Jason Debus Heigl Foundation, Wild Horse Photo Safaris, the Red Birds Trust, and the Cloud Foundation, announced the “Wild Horse and Burro Freedom Rally” to be held on Friday, July 2nd, at 10:00 a.m. on the south steps of the Utah State Capitol to raise public awareness of the plight of Utah’s famed Onaqui wild horses, who face a devastating mass helicopter roundup beginning July 12 that will send 80 percent of the herd to an uncertain future. Heigl and leaders of the groups involved will speak to rally attendees, before traveling directly to the rangeland where the Onaqui wild horses live wild and free. Press should plan to arrive at the event at 9:30 a.m.; protestors should plan to arrive between 8:30 and 9:00 a.m.

Last month, Heigl, a Utah resident, and co-founder of the Jason Debus Heigl Foundation, a non-profit organization dedicated to animal welfare, joined the campaign to prevent the eradication of most of the treasured Onaqui herd in the Great Basin Desert. The horses, beloved far and wide by wild horse enthusiasts, tourists, and photographers, are scheduled to be rounded up by helicopter and incarcerated in private holding facilities by the federal Bureau of Land Management (BLM), and U.S. Dept. of Interior (DOI) led by Secretary Deb Haaland, a former Member of Congress from New Mexico.

“With their historic place on the public lands of Utah, the Onaqui horses are living treasures that contribute to the beauty of the Great Basin Desert, as well as the economic vitality of nearby communities,” said Katherine Heigl. “Instead of cruel helicopter roundups, I call on the Bureau of Land Management to leave the Onaqui horses on the land, manage them humanely with fertility control, and limit livestock grazing to protect the ecosystem.

“I have reviewed Annual Reports from Bureau of Land Management dating back to 2012,” said Erika Brunson, twice a Commissioner for LA Department of Animal Services, and member of the Global Council for Animals. “It is obvious that the roundup tactics of the Bureau have not worked, nor have they properly managed public land. Public Land is legally dedicated to the public and wild horses, not commercial animals. The Bureau allows thousands of commercial cattle and sheep to roam public land who rip up the grass by the root, while horses do not, yet the Bureau blames the horses for erosion, claiming they must do roundups since food is scarce. I have seen photos of the wild herds, and they are healthy, majestic, and beautiful. I have seen videos of the round ups, and they are horrific. The bureau currently has over 50,000 wild horses in captivity, yet they still want to round up more wild horses. This is inconceivable. They don’t even know what to do with the horses in their possession; sadly, many are sold for meat and sent to Mexico and Canada for slaughter. We need to unite and stand up for what is right. We must tell our Senators, Congress Members, as well as the President, and Vice President that we want round ups to immediately stop and demand the Bureau to create a new plan to manage OUR public land.”

“The Onaqui horses are living symbols of Utah’s proud frontier heritage, and they deserve to live wild and free on their range,” said Scott Beckstead, director of campaigns at Animal Wellness Action and the Center for a Humane Economy. “We will use our rally to call on the Bureau of Land Management to cancel the cruel helicopter roundup, limit livestock grazing on the horses’ Herd Management Area, and manage the herd humanely in a way that honors them, and the important role horses have played in the history of both Utah and the United States of America.”

“The Onaqui wild horses hold unparalleled value in the state of Utah,” said Jen Rogers, photographer, and owner of Wild Horse Photo Safaris. “They are a modern-day reminder of our rich historical past which has garnered them admiration as one of the most photographed herds of horses in the world. For those lucky enough to spend time with the herd, the Onaqui are incredible teachers of family bonds, trust, loyalty, and communication. A true representation of freedom and the spirit of the Wild West, they are something to be cherished and protected by all of us here in Utah and beyond. ”

“What's happening to the Onaqui herd is happening to wild horses and burros across the West. Polls show that Americans, Democrats and Republicans alike, love our wild horses and burros,” said Deniz Bolbol, Advocacy Director for The Cloud Foundation. “On this Fourth of July weekend, Congress and President Biden must work with the vast majority of Americans who want these animals managed on the range with humane birth control, not terrifying and tragic roundups.”

Descended from horses used by pioneers and native tribes in the late 1800’s, the Onaqui horses are known for their robust beauty and their ability to thrive in the harsh environment of the Great Basin Desert of western Utah. They are a favorite among wild horse photographers and enthusiasts and are believed to be the most popular and photographed wild herd in the country. Tourists from all over the country, and even the world, travel to Utah to view and photograph their favorite animals, including stallions with names like Charger, Goliath, Buck, Moondrinker, with glimpses of the herd’s elder statesman, Gandalf (also known as “Old Man” by some), being the most coveted prize.

But the Onaqui horses are facing a grim future. On July 12, the BLM will use helicopters to chase, trap, and remove most of them from their home range on Utah’s Great Basin Desert. Helicopter roundups of wild horses are notorious for their cruelty and the suffering they inflict on the animals. Horses will be chased for miles in the summer heat to the point of utter exhaustion, and some will sustain injuries or even be killed. There are new foals and elderly horses in the herd who will be in jeopardy of being left behind, wounded, or even killed during the terror, chaos, and confusion of the stampede into the traps. From there the horses will lose the two things that mean the most to them – their families and their freedom. They will be shipped by truck to BLM corrals where they will languish in barren feedlot conditions, awaiting an uncertain future. After being sorted and separated, the BLM will offer the animals for adoption, a process that poses a grave threat to their lives, as it has been recently reported that the BLM’s wild horse and burro adoption program is sending horses to their deaths in foreign slaughter plants.

The BLM claims there is insufficient forage for the horses on their HMA, yet the agency has allocated wild horses only between 9 and 15 percent of the resources on public lands, while livestock are allocated between 85 and 91 percent. Livestock greatly outnumber the horses currently on the HMA, yet the agency has announced no plans to reduce or eliminate private grazing, and continues to follow the direction of a diabolical plan misleadingly deemed the “Path Forward,” that calls for the roundup and eradication of tens of thousands of wild horses and burros on federal lands at a cost of up to $5 billion to the American tax-payer, according to the most recent Acting Director of the BLM.

The roundups are also planned for tens of thousands of wild horse and burro herds across the western United States, as the BLM heeds the wishes of the livestock industry and scrambles to remove as many wild equines as possible. Unless that is, they are stopped.

In April, a coalition of more than 70 groups sent a letter to Secretary Haaland calling for a freeze on grazing permits and an elimination of livestock grazing on all wild horse and burro Herd Management Areas. There has been no response from Haaland despite the media contacting the Secretary's Office and the White House, who declined to comment.

The lack of response from the Biden Administration, combined with Haaland's testimony before the House Appropriations Committee on April 20th that the Dept. of Interior is "in agreement with the plan of the previous Administration," prompted a second letter in May directly to the President himself. Signed by more than 90 groups, rescues, and businesses, and more than 1,100 individuals, the letter called for Biden to immediately place a moratorium on the mass helicopter roundups. There has since been no response from the White House.
Visit the campaign website at www.SaveTheOnaqui.org for more details on the rally.

Photos of the Onaqui horses can be viewed and used for reporting courtesy of Jen Rogers here.

Animal Wellness Action (Action) is a Washington, D.C.-based 501(c)(4) organization with a mission of helping animals by promoting legal standards forbidding cruelty. We champion causes that alleviate the suffering of companion animals, farm animals, and wildlife. We advocate for policies to stop dogfighting and cockfighting and other forms of malicious cruelty and to confront factory farming and other systemic forms of animal exploitation. To prevent cruelty, we promote enacting good public policies, and we work to enforce those policies. To enact good laws, we must elect good lawmakers, and that’s why we remind voters which candidates care about our issues and which ones don’t. We believe helping animals helps us all. The

The Center for a Humane Economy (“the Center”) is a non-profit organization that focuses on influencing the conduct of corporations to forge a humane economic order. The first organization of its kind in the animal protection movement, the Center encourages businesses to honor their social responsibilities in a culture where consumers, investors, and other key stakeholders abhor cruelty and the degradation of the environment and embrace innovation as a means of eliminating both.

The Jason Debus Heigl Foundation, is a 501(c)3 non-profit, founded in 2008 by Nancy and Katherine Heigl. The Heigls’ desire to end animal cruelty and abuse inspired them to create an organization dedicated to animal welfare that would celebrate the compassion, kindness and memory of a beloved son and brother. Throughout his brief lifetime, Jason loved all animals, especially dogs, cats, and monkeys, and he lived his life extending compassion and kindness to all creatures great and small. The Foundation is his legacy.

The Cloud Foundation (TCF), a 501(c)3 non-profit, has been at the forefront of wild horse advocacy since its inception in 2005. TCF was founded by Emmy award-winning filmmaker Ginger Kathrens, creator of three acclaimed PBS Nature series documentaries that followed the wild stallion Cloud throughout the seasons of his life. Dedicated to the protection and preservation of wild horses and burros on our public lands, The Cloud Foundation advocates for protecting natural wild equid behaviors, repatriation of wild horses to zeroed-out Herd Areas, and equal allocation of forage within Congressionally-designated Herd Areas.

Red Birds Trust 501(c)(3) is a grassroots organization based in Tooele, Utah founded by local wild horse advocates who have immersed themselves in the lives of the Onaqui here in Utah's west desert. It is our goal to help these wild horses live their best lives both on the range and after adoption. Because all board positions are filled by volunteers donating their time and energy to the cause it then allows for all donations received to go to the betterment of our wild and adopted Onaqui horses.