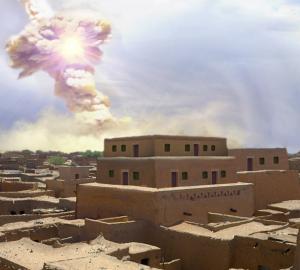 Figure 1. Artist’s impression of the cosmic explosion 3,600 years ago. 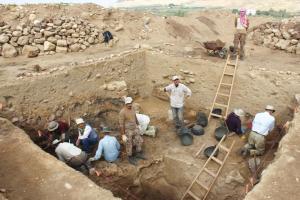 Figure 2. The excavations at Tall el-Hammam, Jordan, northeast of the Dead Sea. Darker ‘destruction layer’ is about halfway down the wall. 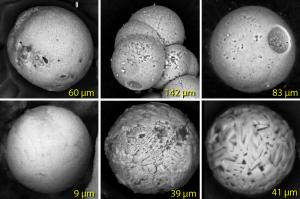 Figure 3. The devastating blast created dust-sized ‘spherules’ of melted sand, iron, and plaster from the palace walls. These melted at more than 3100°F (1700°C).

PRESCOTT, ARIZONA, UNITED STATES, September 20, 2021 /EINPresswire.com/ — About 3,600 years ago, thousands of city people looked up to see a bright object streaking toward them through the sky. Within seconds, the object detonated in the air southwest of the city with the force of 1000 atomic bombs (Figure 1). The fireball was many times brighter than the sun and everyone who witnessed it was instantly blinded.

Temperatures rapidly rose above 3600 °F (2000 °C), which is lethal for humans. The intense heat melted clay pottery, plaster inside the palace, and mudbricks in the walls. Several seconds later, a massive shockwave, moving at about 740 mph (1200 kmh), slammed into the city, pulverizing walls and buildings.

So, what happened? Extensive evidence indicates the culprit was a high-speed space rock about the size of a football field, traveling at ~38,000 mph (61,000 km/h).

This week in Nature’s Scientific Reports, the world’s largest journal, twenty-one co-authors have published an article entitled “A Tunguska sized Airburst destroyed Tall el-Hammam, a Middle Bronze Age city in the Jordan Valley near the Dead Sea.” (Click here to read/download the paper.) The decade-long investigation provides detailed forensic evidence that a cosmic airburst obliterated that city during biblical times about 3,600 years ago (1,650 BCE).

The flash of heat and devastation described in the new publication supports the story of the destruction of Sodom in Genesis 19:24-29. Those verses say that stones and fire fell from the sky, multiple cities were destroyed, thick smoke rose from the fires, city inhabitants were killed, and area crops were destroyed. The biblical account reads like an eyewitness account of a cosmic impact event that is indicated by the scientific evidence. The powerful blast appears to have been larger than the massive 1908 aerial explosion along the Tunguska River, attributed to a large cosmic object that entered Earth’s atmosphere at about 25 times the speed of a rifle bullet.

Tall el-Hammam has been excavated by Trinity Southwest University and Veritas International University for 15 consecutive seasons. Project Director Dr. Steven Collins, assisted by Dr. Phil Silvia, Dr. Gary Byers, and Dr. Carroll Kobs, has long suspected that the large human-built mound (called 'tall' in Arabic) was the biblical city of Sodom based on multiple geographical clues in Genesis. As the largest tall in the Jordan Valley, the city claimed as Sodom by Collins is proven to dwarf both Jerusalem and Jericho at that time. Tall el-Hamman was 10 times larger than ancient Bronze Age Jerusalem and 5 times larger than Jericho.

Beginning in 2005, Dr. Collins’ team discovered an unusual “destruction layer” (Figure 2) just below the modern surface of the two-thirds-mile-diameter cultural mound. They suspected it might provide hard evidence to support the biblical story of the destruction of Sodom.

Dr. Collins says: “We had the archeological history of the site well defined after so many field seasons. However, a far different set of skills was needed to conduct a proper investigation of the Middle Bronze Age terminal destruction matrix and search for cosmic impact signatures. The Comet Research Group had the technical and forensic ability to determine that the field evidence supports the biblical description of ‘fire from the heavens.’” So, in 2014, Dr. Collins invited the Comet Research Group team to examine the destruction layer. The group has authored more than 40 major journal publications defining another cosmic catastrophe at the close of the last ice age about 12,800 years ago, called the Younger Dryas Impact Event.

The biblical account of destruction from the sky turns out to be supported by numerous lines of geochemical and material evidence buried in the Middle Bronze Age destruction layer across the dig site. The carbon-rich layer contains peak concentrations of shocked quartz that only forms at 725,000 psi (5 GPa), equivalent in weight to 60 elephants stacked on a small coin. Researchers also found ‘diamonoids’ that are as hard as diamonds but smaller than a virus. They formed under the intense heat and pressure of the impact. They also uncovered melted pottery and mudbricks; spherules made of melted iron and quartz ; and spherules from melted plaster (Figure 3). The extremely high temperatures within the city also melted many metals, including platinum, iridium, nickel, gold, and silver. Heating experiments indicate temperatures exceeded 3600°F (2000°C), hot enough to turn an automobile into a molten pool of iron.

The cosmic explosion had disastrous effects on people in the city. Dr. Allen West of the Comet Research Group says, “We discovered human bones that had been splattered with molten glass that is indistinguishable from that found after atomic explosions. The people of Tall el-Hammam were killed by the extreme heat and shockwave of an atomic-like explosion, except without the radiation. People and animals within the city could not have survived the detonation. Their bodies were ripped apart and most of their bones were smashed into small fragments.”

This major journal article is certain to draw considerable attention and controversy from both the secular and the faithful. Secular experts dispute any literal claim for the existence of Sodom, instead maintaining that the biblical story is a myth, despite many geographic clues in the Bible. On the other hand, biblical literalists have for centuries proposed other locations for the “Cities of the Plain,” ranging from Tall el-Hammam in the north to several sites to the south of the Dead Sea. The new evidence suggests that Sodom was indeed located in the north. The spectacular destruction of Tall el-Hammam may have generated an oral tradition that was eventually written down in Genesis centuries later.