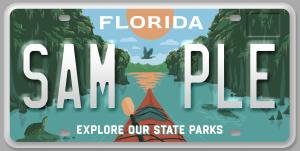 Florida's award winning state parks are the jewel of Florida, showcasing the natural wonders of our state.”
— Representative Allison Tant

The award is presented annually to the person or persons deemed to have made the most outstanding contribution to help sustain, protect and preserve Florida’s award-winning state parks.

Senator Baxley and Representative Tant each led efforts in the Florida Legislature to create a specialty license plate in support of Florida’s state parks. Governor Ron DeSantis signed a bill authorizing the plate into law in June, and the Foundation unveiled the plate’s final design during Monday’s press conference.

“We are delighted to honor Senator Dennis Baxley and Representative Allison Tant, both as passionate supporters of Florida’s award-winning state parks and for their successful efforts in championing a specialty license plate in this year’s legislative session,” Foundation President Gil Ziffer said at a press conference held at the Florida Capitol.

“The Florida State Parks specialty license plate that they helped pass through their respective chambers will provide significant and ongoing funding to enable us to protect and preserve Florida’s state parks,” he added.

Senator Baxley was unable to attend the press conference due to scheduling conflicts, but will be presented his award at a later time.

“Florida's award winning state parks are the jewel of Florida, showcasing the natural wonders of our state. It was an honor to lead the charge in the House in the creation of a license plate to dedicate funding to the protection, preservation and improvements to the precious land and water that are enjoyed by nearly 24 million residents and visitors last year. It was a treat for me to work with my colleagues in the House as we took this vital step for our state park system. I look forward to purchasing my own state park license plate as soon as it's ready. I will remain committed to our state parks for the rest of my life,” said Representative Tant.

The Florida Park Service manages 800,000 acres of land for public recreational use. The 175 state parks contain 948 historic structures and more than 1,500 archaeological sites all of which must be protected and preserved. There are more than 100 miles of pristine beaches, thousands of miles of hiking, biking, equestrian and paddling trails, 2,769 miles of roads, 171 bathhouses, 363 restrooms, 570 pavilions – and even four lighthouses.

“As the last 18 months have clearly demonstrated, Florida’s state parks play an important role in providing open spaces where people can recreate and exercise in a safe, socially distanced environment,” Ziffer said. “The demand for these open spaces will continue to increase as Florida’s population is expected to top 23 million by 2025 as tourism numbers continue to grow.”

“To meet this growing demand, it is important that state parks continue to provide exceptional value in terms of visitor experience and the range of outdoor pursuits available. It is also important that these pursuits are available to the widest possible audience both in terms of accessibility and diversity,” he added.

The Foundation, founded in 1993 as Friends of Florida State Parks and renamed in 2018, is a 501(c)(3) nonprofit corporation whose mission is to support and help sustain the Florida Park Service, its 175 award-winning parks and trails, local Friends groups and more than 20,000 park volunteers.

The volunteer Board of Directors represents private and public sectors as well as local and statewide interests.