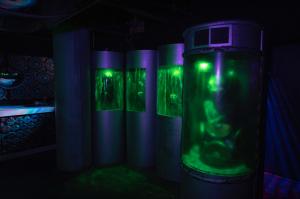 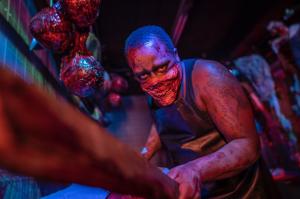 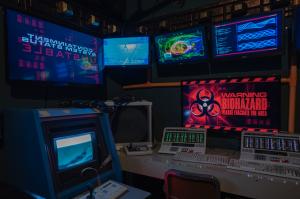 Spine-tingling terror abounds at Mission Control at the #1 Haunted Attraction in the United States, Pontiac Michigan’s Erebus Haunted Attraction. Nearly a 1/4 mile labrynth winding through four floors of fright. Do you have what it takes to make it throug

#1 Haunted Attraction in the US Unveils Terrifying Multi-Sensory Additions: Attack on Area 51 and The Chop House Featuring Miss Patty's Meat Pies – Do you dare?

PONTIAC, MICHIGAN, UNITED STATES, October 21, 2021 /EINPresswire.com/ — Spine-tingling chills and thrills abound as Erebus Haunted Attraction, the #1 Haunted Attraction in the U.S.A. and world-renowned fortress of fear bombard the senses during its 22nd Halloween Season. The fright-fest of electrifying hair-raising, skin-crawling sensory assault that has made Erebus famous rise far above the haunt's 4 floors of terror as those who dare try to maneuver their way through over a half-mile labyrinth which includes the newly designed Attack on Area 51 and The Chop House, featuring Miss Patty's Meat Pies.

Attack on Area 51- Aliens who were secretly hidden away from the public eye and the subjects of decades of gruesome scientific experiments have escaped the highly classified top-secret compound Area 51 to Erebus to complete their mission…total destruction.

The Chop House featuring Miss Patty's Meat Pies – The dead, the near-dead, and the living can't escape the wrath of Miss Patty. Not for the faint of heart, Miss Patty painstakingly prepares another batch of her "world-famous" meat pies that may well contain a mystery meat of questionable nature.

Love Fall and Halloween, but not fear? Erebus Escape, located at 34 Oakland Avenue, just 6 blocks north of Erebus Haunted Attraction in Downtown Pontiac, offers fun without fear at its premium escape room facility. Each room is an elaborate adventure that immerses guests in multiple settings as they work their way through. Erebus Escape attractions include:

– Eye of Horus where, as a crusader, you must harness the Eye of Horus.
– FAMILY FANTASY Zone which is great for beginners and kids recommended for ages 5+ with adult supervision.
– Dragon's Curse where players free the Wizard to save their lands. All heroes are called forth to defeat the Ice Queen while playing Once Upon a Time.
– Lockdown puts you in the convict's chair and challenges you to escape death row.
– Body of Evidence has you and your team must hunt down a serial killer.

Erebus Escape is open 12pm – 11pm on Thursdays, Fridays and Saturdays. It is bookable by online reservation only. No walk-ins or cash on site. Reservations and booking calendar online at Erebus Escape.

Named the number one haunted attraction in the United Stated in the 2019 USA Today 10 Best Readers’ Choice Travel Awards, Erebus 4-Story Haunted Attraction consistently ranks as one of the world’s scariest haunts. As Michigan’s largest haunted attraction and former holder of the Guinness World Record for largest walk-through haunted house from 2005 through 2009, owners Edward and James Terebus have spent nearly four decades plotting terror to keep you up at night.

Opened in 2000, Ed and Jim Terebus have built Erebus into an empire of fear in downtown Pontiac. Named after the Greek god of primordial darkness, Erebus is a four-story playground for your mind. With a staff working year-round, Erebus Haunted Attraction’s engineers create and design thrills to agitate all five of your mortal senses.