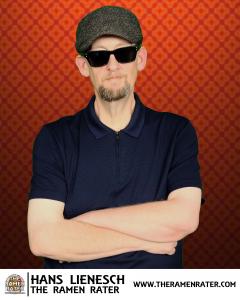 Hans Lienesch has reviewed 4,000 varieties of instant noodles from around the world 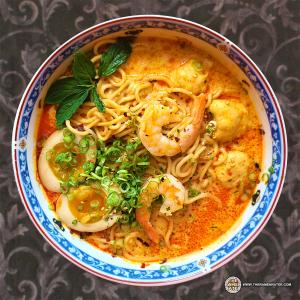 Hans Lienesch, known as 'The Ramen Rater' has been reviewing instant ramen noodle products since 2002.

Hans' first introduction to the instant noodle was at an early age. Growing up in Anacortes, Washington, he was always interested in the exotic. He often would spend summer nights listening to his father's shortwave radio on the patio, trying to get an ear of some far flung radio station.

His mother Barbara would make a recipe from time to time she referred to as 'spaetzle,' by cooking instant noodles al dente, then frying them in a skillet with a little oil, then adding beaten eggs. The variety she used went off the market and his father recommended a trip to Seattle to find a replacement at a large Japanese supermarket.

One was found, but Hans' attention turned to the myriad varieties on the instant noodle aisle – colorful packaging and exotic labels from exotic places stood out to him and he was fascinated.

The Ramen Rater started on a whim back in early 2002. Lienesch was interested in becoming a web designer and decided to make a fancy list of his likes and dislikes to learn more about the profession. That went on for a couple years with sporadic reviews ultil 2005 when his attention switched to reviewing spicy hot sauces as The Sauce Rater. This all reverted back to instant noodles with his move to Edmonds, Washington where he lived within a short walk to a large Asian grocery.

This became a daily thing, providing a little exercise and a great source for new material for www.theramenrater.com. Over the years, companies that produce instant noodles took notice – some invited him to visit their facilities, such as Nongshim in 2012 in Rancho Cucamonga, California, MyKuali in Penang, Malaysia in 2014, MAMA of Thailand in 2015, and Howsler Foods of Taiwan in 2016.

Annual global top ten lists of his favorites gained popularity throughout Asia and garnered multiple television, internet and web appearances. A South Korean newspaper, the Chosun Ilbo coined him 'The God OF Ramen' and the moniker stuck.

He now resides in Kenmore, Washington with his wife and two children. Review 4000 and all other reviews and features can be seen at www.theramenrater.com. The release date of November 4th isn't a coincidence – it would have been his mother Barbara's 86th birthday.