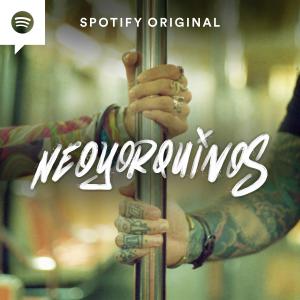 This new podcast elevates the voices of diverse Latin American artists that share their unique stories of surviving and thriving in New York.

You love it, you hate it, that’s New York.”
— Alea, Colombian singer-songwriter.

NEW YORK, NEW YORK, UNITED STATES, November 10, 2021 /EINPresswire.com/ — What does it mean for a Latin American artist to live in New York? How does this city influence their art and life? In "Neoyorquinos" [“New Yorkers”], the new Spanish-language Spotify original podcast, Latin American artists, creatives and romantics share their stories and unique experiences of letdowns and celebrations, of passion and determination needed to stay and thrive in New York. The first season of the podcast, produced by ViceVersa Magazine and Timeline Digital, is now available for free on Spotify.

“We wanted to bring to light the artistic contributions of Latin American immigrants and perhaps inspire others who aspire to come to New York. These stories expand our narratives and allow listeners to imagine a more complex and nuanced experience,” says Flavia Romani, director and co-creator of Neoyorquinos. “The podcast is also written, directed, produced, edited, and hosted by a woman-led, all Latino team.”

In eight episodes, Neoyorquinos elevates the voices of audacious Latin American artists with diverse backgrounds, ages, and birthplaces, from Colombia and Venezuela to Chile and Mexico. Their stories of grit and determination that propel them forward allow us to go behind the scenes of a city that is known as a dream destination for artists but remains an expensive and competitive place to live and work. The podcast lays bare the contradictory love-hate relationships between the artists and the city.

“You love it, you hate it, that’s New York,” says Alea, a Colombian singer-songwriter featured in the first episode of the Neoyorquinos podcast entitled “Nueva York te obliga a sacar las garras” [“New York forces you to get your claws out”].

In each interview, the artists share their experiences, challenges, and drive that ultimately keep them afloat in New York from a location of their choice that holds a special meaning to them. Their passionate stories accompanied by the vivid narration by Neoyorquinos host, Colombian-American actor Estefanía Giraldo, take the listener on a unique, poetic journey through the city and the lives of those that help shape it.

In the first season of the Neoyorquinos podcast, you will meet: Alea, a Colombian singer-songwriter who fuses Caribbean rhythms with those of New York; Anita Pantin, a Venezuelan artist that walks us through the corridors of the Metropolitan Museum of Art; Emmanuel Guillén Lozano, a Mexican photo documentalist who has portrayed the horrors of the most violent and dangerous places in Mexico; Samuel Marchán, a Venezuelan violist and teacher; Yeti Oc, a Chilean artist, illustrator, and activist; Stefano Fossa, Venezuelan director, writer, and actor; Rolando Peña, a Venezuelan conceptual artist who takes us back in time to the East Village of the ‘60s; and Sinuhé Padilla, Mexican musicologist, composer, guitarist, and producer.

ViceVersa Magazine
Based in New York, ViceVersa Magazine is a daily online publication that promotes the talent and achievements of the Latino community in the U.S. With over 400 collaborators, from more than 30 countries spanning the U.S., Europe, and Latin America, ViceVersa Magazine has become a platform for showcasing the analytical and creative insights of this wonderfully diverse community.

Timeline Digital
We are an Emmy-Award winning production and post-production company. At Timeline Digital, we produce compelling content for today’s multi-platform distribution outlets. We believe in media’s potential to educate, empower, and foster understanding.

Estefania Giraldo
Estefania Giraldo is a Colombian-American actor, writer, and museum educator based in New York City. She is a graduate of the Tisch School of the Arts at New York University and the Stella Adler Studio of Acting. In addition to her work in the world of theatre and film, Ms. Giraldo has spent the last few years working at the Tenement Museum in Manhattan's Lower East Side, a museum dedicated to highlighting the stories of working class immigrant families from the 19th-21st centuries. She currently lives in Brooklyn.

Listen to the Neoyorquinos podcast on Spotify.