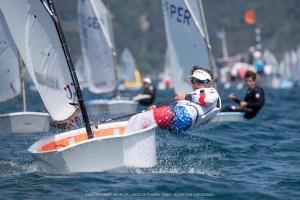 HILTON HEAD ISLAND, SC, USA, November 11, 2021 /EINPresswire.com/ —
Several of the best youth sailors in the United States will be on hand for the 2021 Optimist Pram Invitational Regatta here this weekend (Nov 13-14) at Windmill Harbour’s South Carolina Yacht Club (SCYC). The event, presented by Zim Sailing will host six of the best junior sailing teams on the East Coast.

Four of the best Opti sailors in America will also be on hand, including SCYC’s James Pine and Nathan Pine, twin brothers who are part of the US. National Opti Team; Hampton’s James Allgeier, who is the reigning national champion, and Sarasota’s James Fulvig, also a member of the national team. Early this summer James Pine, was the top qualifier for the U.S. Team in the World Championships held in Italy in June, where he finished 9th overall among more than 380 international sailors from five continents.

The Optimist (Opti) is a class of small, single-handed fibrerglass boats for youth sailors age 8 to 15. Opti’s are the most popular youth racing class in the world with more than 150,000 registered boats. Zim Sailing, a Rhode Island-based sailboat building firm, provides the competitors with 18 identical brand new Z-Force boats with identical equipment so that no sailor has an advantage. Winning teams are solely based on individual skill levels and how they handle the wind and water conditions – not the characteristics of their boats.

Newman said the competition consists of a round robin with 60 races of 8 to 12 minutes each over the two days, followed by a Medal Round and a Championship Round. The races are held in Calibogue Sound off the Windmill Harbour docks. They begin at 10:30 a.m. Saturday and 10 a.m. Sunday, and can be viewed from the Windmill Harbour docks or from other boats on the water.