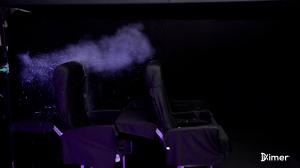 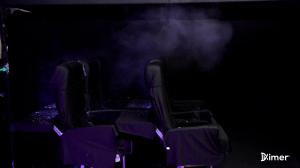 Within 3 seconds the unmasked cough travels 2-3 rows forward in a “viral plume,” while smaller coughed particles settle on high touch areas like headrests and tray tables. 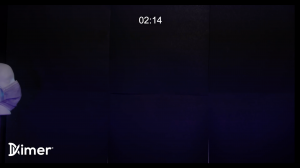 Dimer's Advanced Projects Lab finds that unmasked coughed particles travel forward at least 2-3 rows and outward to the sides in a "viral
plume."

As a public service to air travelers, the flight crews and the airlines themselves, we wanted to show visually whether or not wearing a mask is effective toward creating a safer environment.”
— Dr. Arthur Kreitenberg, CTO and Co-Founder of Dimer

LOS ANGELES , CALIFORNIA , USA, November 15, 2021 /EINPresswire.com/ — The TSA air travel mask mandate is sure to increase the stress of the holiday travel season. There have been more than 3200 incidents of unruly unmasked passengers, despite threatened fines and jail time. Everybody on board an airliner, must wear a mask for the duration of the time of the flight including boarding and deplaning. Here’s why.

Dimer UV Innovations, a leader in the development of safe and sustainable technologies for surface disinfection, conducted a study to demonstrate what happens when an airplane passenger coughs with, and without a mask. The study was presented earlier this year at the Aerospace Medical Association Annual Meeting. Dimer's Advanced Projects Lab undertook the study in its Commercial Aircraft Mockup facility as a public service to passengers and for the benefit of the aviation community.

Under blacklights, Dimer’s study used a fluorescing powder to represent germs with high-speed videography capturing what happens to particulates when a passenger coughs. The staged airplane cabin was equipped with a specific air ventilation scheme simulating filtration common to single-aisle aircraft which provides air exchanges every 2-3 minutes. The fluorescing powder was released at a speed of 33mph (The American Lung Association reports the average speed of a cough at 50mph). Without a mask, the smaller coughed particles travel forward at least 2-3 rows and outward to the sides in a "viral plume." (see photo/video)

The "viral plume" also travelled across passenger seats before the simulated particles reached the air intake ports close to the floor.

Larger particles, representing those mixed with saliva and mucus, quickly settled onto surfaces, including seatbacks, video displays, armrests and tray tables. SARS-CoV-2 survives up to 3 days on surfaces and can "re-launch" as dangerous aerosol (see photo), potentially exposing passengers to infectious particles. The visuals support the CDC’s recommendation that surfaces should be disinfected in “indoor community settings” to help prevent the spread of COVID.

A mask covering the simulated cough dramatically reduced the volume, velocity and spread of the "viral plume." (see photo)

Dr. Arthur Kreitenberg, Chief Innovation & Technology Officer and Co-Founder of Dimer said of the study: “As a public service to air travelers, the flight crews and the airlines themselves, we wanted to show visually whether or not wearing a mask is effective toward creating a safer environment. The video we captured provides objective evidence in support of wearing a mask. We hope that those who are mask averse will consider the visual aid and be more informed of their own mask’s purpose.”

###
Dimer UV Innovations is a leading innovator in UV disinfection and has produced the GermFalcon®, UVHammer® and other cutting edges devices to reduce pathogens that cause disease on airplanes, in hospitals, schools, hotels, sports venues and outer space.