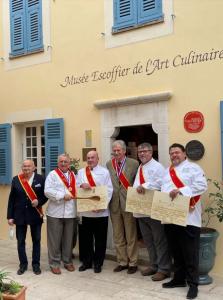 Kaminski and Alexander “Enthroned” for their "Excellence in Cuisine" into the Disciples Escoffier International, Monte Carlo

“Both Ray and I are truly honored to be recognized by Disciples Escoffier International,” Mike Kaminski says. “Here at Chula Vista Resort, we pride ourselves in serving our guests excellent cuisine options at all of our restaurants. It is a tremendous honor to share that passion on the international stage, especially on the celebration year marking the 175th birth anniversary of Auguste Escoffier himself and where it all began on the French Rivera.”

In celebration of the induction, Kaminski and Alexander attended the black tie Epicurean Dinner held at the 4-star Fairmont Hotel in Monaco on October 28th. The French Rivera Epicurean Dinner was one of 40 dinners held worldwide in celebration of French cuisine, the legacy of Escoffier, and to relaunch the tradition of charity dinners imagined by August Escoffier himself.

Hosted by the Auguste Escoffier Foundation and the Association Disciples Escoffier International, the Epicurean Dinner was held in Monaco under the high patronage and presence of HSH Prince Albert II of Monaco. Evening raffle ticket proceeds benefited the Prince Albert II of Monaco Foundation with its focus on global protection of the environment. Guests were treated to a sumptuous 7-course culinary masterpiece dinner prepared by nearly 20 renowned French chefs.

Inductees for enthronization into the Association Disciples Escoffier International are selected for demonstrating the “Escoffier Spirit” and its four guiding pillars, including: upholding the legacy of classic French cuisine, promoting culinary evolution, actively sharing their culinary knowledge with others, and actively supporting philanthropy efforts for a better world.

A new inductee recites the disciples oath, “I take an oath to transmit, serve and honor the Cuisine, its culture, and its permanent evolution.”

“Meeting culinary artists from around the world, was inspiring.” Kaminski says. “We are returning to the Dells filled with rejuvenated passion on how we can continue building our culinary legacy to the next level at Chula Vista Resort.”

About Auguste Escoffier
Widely regarded as the father of modern French cuisine, Auguste Escoffier (1846-1935) was known as the “King of Chefs, Chef of Kings”. He pioneered fine dining and the luxury hospitality industry as a cofounder of the Ritz and Carlton hotels. A gifted chef and businessman, Escoffier is remembered equally as fondly for being extremely generous in sharing his time, talent, and treasure to fight hunger, poverty and inequality.

Chula’s flagship restaurant, Kaminski's Chop House, is committed to serving quality, hand-cut dry aged black angus steaks, fresh seafood, and scratch sauces in the tradition of the Great American Steakhouse. Kaminski’s Chop House earned the designation of “Best Steak in Wisconsin” in 2021 by Eat This Not That.com, and has received Trip Advisors’ "Travelers Choice award 2012 thru 2020".