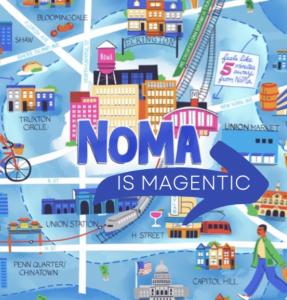 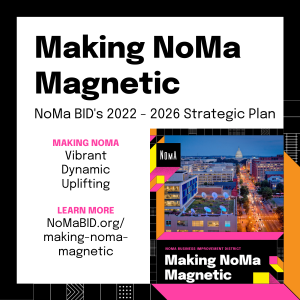 NoMa is a wonderful place today and still growing into the neighborhood it will ultimately become. We’re thrilled to unveil this Strategic Plan to make NoMa magnetic.”
— Maura Brophy, President & CEO, NoMa BID

WASHINGTON, DC, UNITED STATES, November 17, 2021 /EINPresswire.com/ — The NoMa BID has a new Strategic Plan. The plan will guide the organization’s activities over the next five years and is rooted in the central goal of “Making NoMa Magnetic.”

The new Strategic Plan was developed over an 18-month long process, during which the BID consulted with dozens of community members and experts. The process brought together a diverse group of small and local business owners, homeowners, commercial property owners, ANC members, restauranteurs, office tenants, architects, urban planners, non-profit leaders, and engaged citizens, who collectively developed a strategy that will build on the tremendous strengths of the neighborhood and guide NoMa towards its future.

“A primary goal in the development of this Strategic Plan was to attract input from as many stakeholders as possible,” said Maura Brophy, President & CEO of the NoMa BID. “The ideas and reflections shared by the community allowed us to focus on issues and opportunities that matter most to NoMa. The result is a plan that will inform the work of the NoMa BID over the course of the next five years, and also allow us to position the neighborhood for continued growth over the next 10, 15, 20 years and beyond. This is important given the trajectory of growth that the neighborhood is on, and the fact that NoMa’s unique mix of uses is likely to make it a post-pandemic neighborhood of choice.”

After hundreds of hours of research, focus group discussions, and individual conversations, a strategy organized around six key pillars was developed. The six core pillars of the Strategic Plan for 2022 – 2026 are:

• Connectivity – Ensuring NoMa’s streets, sidewalks, trails, and rails balance the needs of the community;
• Economic Development – Enabling NoMa to remain a resilient engine of growth and opportunity;
• Inclusivity – Prioritizing justice, equity, diversity, and inclusion as foundational concepts for both the neighborhood and the organization;
• Play – Elevating fun—for children and adults alike—as one of the neighborhood’s main offerings;
• Safety – Finding innovative approaches to ensure that NoMa is a community where people are safe;
• Brand & Reputation – Cementing NoMa’s identity as a dynamic, vibrant, and uplifting place for everyone.

“It’s an incredibly exciting time for NoMa. It’s a wonderful place today, and it is still growing into what it will ultimately become,” said Brophy. “We’re thrilled to be unveiling this Strategic Plan and to make NoMa magnetic through the work it will allow us to do.”

To learn more, and view the plan, visit nomabid.org/making-noma-magnetic.

About NoMa BID
The NoMa Business Improvement District (NoMa BID) is a non-profit organization whose mission is to be a steward and champion of the neighborhood of NoMa. The NoMa BID encompasses 35 blocks just north of Union Station in Northeast Washington, DC. The NoMa BID is among the fastest-growing neighborhoods in Washington, DC, and is comprised of more than 16 million square feet of new development, with more than 30 million additional square feet of mixed used development planned. There are more than 42,000 households within a ½ mile radius of the BID, who are served by the amenities in the commercial core of NoMa. The area is supported by unparalleled public transportation access with two Red Line Metro stations, and VRE, MARC and Amtrak connections at Union Station. The “Walkscore” for the neighborhood is 92, and the neighborhood has 22 LEED-certified and Energy Star buildings. For more information, visit nomabid.org and sign up for our newsletter. Follow us on Twitter (@NoMaBID), Instagram (@noma.bid) and LinkedIn (/noma-business-improvement-district) and like us on Facebook (/NoMaBID).