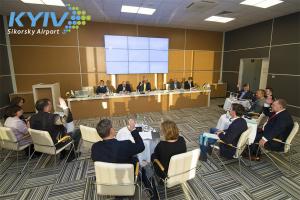 KYIV, Украина, November 17, 2021 /EINPresswire.com/ — On November 9, 2021, Business Terminal “B” of Kyiv Sikorsky International Airport hosted a meeting of the Committee of Employers' Federation of Transport of Ukraine (EFTU) with employers in the air transport sector “Ratification of the Open Skies Agreement between the EU and Ukraine. Challenges and tasks. Implementation efforts”. The purpose of the meeting was to discuss the challenges and tasks to be addressed by the domestic aircraft industry as a result of signing the Common Aviation Area Agreement between the European Union and Ukraine on October 12, 2021. Under this Agreement, Ukraine has committed to gradually incorporate – add to its legislative framework without changing the content – EU requirements and standards in the civil aviation sector. The form and method of legislative acts of Ukraine to be used for the implementation of relevant EU regulations and directives remains at the discretion of Kyiv.

“First and foremost advantage of Open Skies Agreement is a better competitive environment between airline carriers,” says Serhii Korshuk, First Deputy Head of the State Aviation Service. “These are new opportunities for the entire industry, each member of the market will benefit: airports and ground handling companies, and primarily, of course, the passengers. They'll have a larger selection of products, routes at favorable prices.”

However, all members of the aviation market are aware of risks associated with the opening of Ukrainian aerial domain for foreign carriers. In particular, the domestic airline companies think that this Agreement will trigger inequality in rights. According to the Aviation Committee, European carriers in Ukraine will have more benefits than the Ukrainian companies in the EU member states.

“Those organizations that have their own infrastructure – airports, UkSATSE – will benefit from this Agreement for some time. While Ukrainian airline carriers may incur losses, because as of today, it is much more difficult, and sometimes impossible, for a Ukrainian carrier to obtain transportation permits in the EU as compared to a European carrier in Ukraine,” stresses Serhii Fomenko, member of AC, Vice President of Ukraine International Airlines. “If a shared aerial domain lead to extinction of Ukrainian airline companies due to unfair competition, all market participants will be on the loosing side. The absence of competition will prevent the reduction in ticket price for the passengers.”

The issue of airport charges – a critical component of the ticket price – is still up. “As of today, according to Law on powers of the central management, these charges are regulated by the Cabinet of Ministers of Ukraine,” said Anna Mazur, Chief European Integration Officer of the Ministry of Infrastructure of Ukraine. “However, we want to deny these powers and regulate the charges only for the airports with significant traffic, i.e. above 5 million passengers a year.”

After welcoming the signing of the Open Skies Agreement and stressing the vast opportunities for the market development, UkSATSE mentioned some particular issues to be faced in the implementation of the document. For instance, the regulatory aspect of the collection of navigation service charges and arrangement of “aerial domain blocks” provided for by the document.

“Not all EU directives are implemented successfully in the EU member states due to existing ins and outs, and most of these countries had problems that resulted in discontentment with the initiative,” said Igor Blinov, member of the AC, Head of the Economy and Finance Department of UkSATSE. “Most EU countries believe that this initiative is beyond their national interests. When we see such a feedback in the EU, we opt for a more cautious approach to implementation of these initiatives in Ukraine.”

However, UkSATSE emphasized that some provisions relating to air traffic control have already been implemented by Ukraine. Namely, the technical part of the functionality fully complies with European regulations. “Ukraine serves flights in the aerial domain of the European countries as any EU country does. From the operational point of view, we have already done everything. We will retouch where necessary”, says I. Blinov.

The key conclusion made by the participants of the meeting is that it is necessary to conduct a detailed study of all the rules of Open Skies Agreement and elaborate proposals from the members of Ukrainian aircraft industry. The Aviation Committee was unanimous in judgments with regard to the significance of prevention of violation of Ukraine’s national interests and interests of the members of the aviation market. In particular, a list of legal acts in the aviation sector will be updated to include amendments in accordance with EU requirements, a Scheduled Plan for implementation of the amendments will be prepared, legislative mechanisms of transmission of airports to concession will be analyzed. In addition, relevant ministries together with airline carriers and airports will be asked to conduct a thorough analysis of the airport charges in the EU countries in order to upgrade the charges of the domestic airports to the European level. This will help find an acceptable solution both for airline carriers and airports that will provide sufficient funds to develop their own infrastructure.

“Problems that hamper creation of the environment for members of the Ukrainian aviation industry similar to that for the European companies will be detailed in the appeals to the Ministry of Infrastructure and State Aviation Service of Ukraine,” concluded Valerij Polishchuk, Head of the EFTU’s Aviation Committee, First Deputy Head of the Supervisory Board of Kyiv International Airport. “These issues must be addressed at the state level. And EFTU will do its best to contribute to this process.”