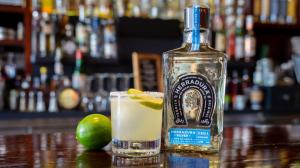 SAN JOSE, CA, UNITED STATES, November 18, 2021 /EINPresswire.com/ — Republic Urban Properties has announced that Copita Tequileria y Comida, the famed Mexican Tequileria in Sausalito, will open a second location in the stunning two-story restaurant site now going up at the northeast corner of Willow Street and Lincoln Avenue in the heart of Willow Glen. Occupying a space inspired by the romance of San Miguel Allende and lovingly brought to life by renowned celebrity chef Joanne Weir and Larry Mindel, the legendary restaurateur behind Il Fornaio, Copita is poised to take its place among the truly memorable restaurant venues in Northern California.

The new Copita Tequileria y Comida is actually two restaurants in one. The highlight is the rooftop bar. Overlooking bustling downtown Willow Glen, the second-story terrace provides plenty of intimate seating around small tables and firepits, places to gather and celebrate while enjoying a variety of small plates and a robust cocktail menu. An expansive bar area will offer a wide selection of tequila and mezcal—a Copita specialty. Downstairs, diners can savor Copita’s modern, sophisticated take on Mexican cuisine in a more traditional, beautifully appointed full-service dining area. Both settings feature plenty of outdoor space to take advantage of the spectacular local weather and to accommodate customer preferences in post-Covid dining.

THE FOOD (AND DRINK)

Copita is famous for its exciting re-imagining of classic Mexican fare—creating the best of traditional Mexican preparations and flavors using the most delectable, highest-quality locally sourced produce and proteins. Every item on the menu, from the chorizo to the sauces to the tortillas, is handmade and 100% gluten-free. The seasonal menu features an array of mouth-watering tacos, tangy ceviches, succulent roasted meats, and other dishes, all crafted under the careful eye and exquisite palate of the Maestra de Cocina, Joanne Weir.

While Copita gets accolades for its food, it is also renowned for another reason: its love affair with tequila. In fact, it was a margarita contest between co-owners Weir and restaurateur Larry Mindel that spawned the restaurant in the first place. “Larry’s margarita was very tequila-forward; mine was more balanced,” Weir recalls with a smile. Mindel ceded the win to Weir and suggested they open a restaurant together – the result was Copita. The Sausalito location serves about 100 varieties of tequila and mezcal; Copita Willow Glen will offer that many and more and will feature a dedicated tasting area for those who want to become more knowledgeable about this delicate and intriguing spirit.

While she may be an East Coast native, Chef Joanne Weir, the creative force behind Copita, has also been a Bay Area favorite for more than 30 years. Whether you know her from “Plates and Places” or any other of her award-winning cooking shows on PBS, her acclaimed cookbooks (she’s written nearly two dozen—her first, From Tapas to Meze, was one of Julia Child’s favorites; another, Weir Cooking in the City, won a James Beard award) or the many cooking classes she offers here and abroad, you know that Weir’s warmth, curiosity, passion for cooking, and most of all, her love of sharing good food, is contagious.

A fourth-generation cook who spent her formative years on her grandparents’ farms, Weir was steeped in the locally sourced, organic tradition long before she joined Alice Waters at the famed Chez Panisse in Berkeley. Waters calls Weir “a true purist” who seeks out which ingredients are “the most alive and vibrant” and uses those ingredients “simply and beautifully.” It’s that vibrancy that makes the original Copita such a stand-out, and what Weir is eager to expand upon at the new location in Willow Glen. “I may not be steeped in traditional Mexican cooking, but I know flavors,” she says. Her mission: clean, fresh flavors with Mexican flair. Weir is also a hands-on manager with a perfectionist’s attention to detail. “If I’m going to put my name on this restaurant, I’ll be there, tasting every dish that goes on the menu.”

With a background in fine arts, Weir’s eye for detail also extends to the design of the restaurant itself. Her tasteful aesthetic is evident in the original Copita. The look for the new locale is still in the early stages, but Weir knows the experience she wants to create. “Copita’s warmth is what people feel the moment they walk in,” Weir confides. “We want people to smile, to feel like they’re with family.”

He may be best known locally for being the powerhouse behind Il Fornaio, MacArthur Park, Poggio and Prego, but restaurateur Larry Mindel has launched dozens of wildly successful establishments over his long career. “I always look for the opportunity to do something a little bit different, but a whole lot better, than the competition,” he says. Copita has a special place in his heart. Launched almost on a lark in 2012, the popularity of the charming little restaurant in Sausalito took off beyond anyone’s expectations. It was so successful, in fact, that Mindel soon began thinking about a new location.

But the setting had to be just right. It was only when Mindel met Michael Van Every, who was looking for a restaurant partner worthy of the novel space he was creating in Willow Glen, that things clicked into place. Once Mindel scrambled up the ladder to what would become the rooftop terrace, he knew the vision that he and Weir shared of an exciting and lively restaurant, one that people would want to visit over and over again, would come to life.

Indeed, Mindel expects Copita to be the most vivacious restaurant around, one worthy of a special trip. According to him, a great restaurant begins and ends with exceptional food – a given, considering Weir’s exceptional talent for creating memorable dishes. Combine that with a beautiful architectural setting and attentive, professional service, and you get a place people want to go back to, whether it’s a casual Tuesday lunch or a special evening celebration. “When you take that first bite, or that first sip and go, ‘Wow!’—that’s the moment we live for,” he says.

THE DEVELOPER: MICHAEL VAN EVERY

For developer Michael Van Every, the building that houses Republic Urban Properties’ new office space and the restaurant that will set it apart is truly a labor of love. Inspired by the gorgeous World Heritage city of San Miguel Allende, Van Every wanted to recreate the feel of the lively second-floor restaurant and entertainment establishments there that overlook the energetic hum of the streets below. “Republic wants to create landmarks that inspire people,” he explains. “We knew that a two-story restaurant with a rooftop bar could be a pillar destination in what is already a great business and entertainment district.”

He also envisioned an architectural style that would pay homage to some of San Jose’s most beautiful neighborhoods. “We wanted to embody a romantic display of Spanish colonial architecture, the one true architecture of San Jose that’s done really well and reflected in local neighborhoods like the Rose Garden and Willow Glen,” he says.

Into this setting, Copita fits perfectly. “Like Willow Glen, Copita has charm and sophistication,” Van Every notes. He then adds confidently, “And, like Willow Glen, it will have history.”

Copita Tequileria y Comida Willow Glen – At a Glance:
– Two-story Mexican-inspired restaurant
– Rooftop bar serving small plates and over 100 varieties of tequila and mezcal
– Full-service dining below
– Both spaces total 6,400 square feet, approximately one-third of which is outside
– Expected to employ up to 100 staff members
– Targeted opening: Summer 2022

Republic Urban Properties and Copita Tequileria y Comida invite media to the announcement of the famed Mexican tequileria coming to San Jose, happening at the rooftop of the in-progress Republic Urban Properties building. Join us for this announcement and press event to hear from the speakers, get additional interviews, b-roll and plenty of guacamole, ceviche and both types of Copita margaritas!

About Republic Urban Properties
Republic Urban Properties is the West Coast Division of the Republic Family of Companies, known for developing quality real estate throughout the United States, from land development and historic adaptive reuse to shopping malls. Republic specializes in transit-oriented and mixed-use projects, is involved in a number of projects in the public and private sector areas for acquisition and/or land joint venture partnerships, and ultimately, builds landmarks. This innovative and lean team has a magnitude of experience working closely with state, county, and city governments to successfully navigate the intricacies of California’s regulatory environment. Republic Urban Properties is developing over 5.7 million square feet of multifamily, office, retail and hospitality, with an estimated market value among projects slated for completion within the next five years totaling approximately $1.79 billion. Ranked in the Top 50 Bay Area Developers by the San Francisco Business Journal, Republic plays an integral role in making San Jose and the Peninsula one of the top three multifamily markets in the country. Learn more about Republic Urban Properties by connecting with us on LinkedIn, or at republicfamilyofcompanies.com/about/republic-urban-properties/.

About Copita Tequileria y Comida
​​Located in the heart of downtown Sausalito, Copita is a vibrant neighborhood restaurant serving seasonal and modern Mexican fare with a twist. Copita offers lunch and dinner daily plus weekend brunch with seating in our dining room, full bar and heated patio. Copita menus are 100% gluten-free and feature local California produce, including organic handmade tortillas for our extensive taco list. With over 100 tequilas, mezcals, an award-winning margarita and unique cocktail lineup, Copita is the recipient of many awards and recognition including “Best Mexican Restaurant” in Marin County and “Best Margarita” in the Bay Area. Learn more at www.copitarestaurant.com or on Instagram, Facebook, and Twitter.