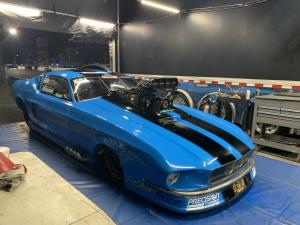 Patrick Williams of Williams Motorsports gets his Chevy S10 ready for qualifying in the staging lanes of SCSN Las Vegas. 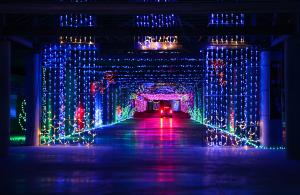 The drive through tunnel of the Glittering Lights Las Vegas show.

From the Christmas Tree Light of the Drag Strip to the Glittering Lights Show at the NASCAR track, family festivities are under way.

As a highly anticipated race event each year, the Street Car Super Nationals (SCSN) returns to the speedway for its 17th year. On this year’s racer participation, SCSN President Mel Roth said, “This has been a record turnout, the largest in the history of SCSN.” With 16 race classes featured in the event, all day racing entertainment is provided to spectators from when the gates open at 11am until the race schedule completes, typically well into the evening.

The SCSN Las Vegas event includes racers who have traveled a significant distance to participate. “Last year the borders were not open, but this year it is, so it has allowed even more racers to head south. We have participants from Manitoba and Winnipeg, Canada. We even have participants from Alaska,” Roth said. One such racer is Chris Richards and his 1969 Blown Alcohol Mustang. “Mel and his team do a fantastic job hosting this race. It’s well put together and I’m having the best time here!” said Richards.

Also echoing the sentiments for one of the premier west coast races of the year is Patrick Williams of Williams Motorsports. Racing his 1982 Chevy S10 Truck, he and his team travel down from Northern California to participate in multiple classes in the SCSN. “Qualifying has gone extremely well and the weather conditions are great,” said Williams. “We look to continue with some more good runs that will set us up for eliminations.” SCSN runs through Sunday, Nov. 21 and welcomes spectators of all ages including kids. “You can come out to our event all day and head right over to the light show. What can be better than that?” concludes Roth. For more information, visit Street Car Super Nationals Event.

From one family event to another, attendees of SCSN can cross Speedway Boulevard to find another grand display of entertainment in the Glittering Lights’ drive through tour. Featuring over 600 displays that amount to over five million LED lights, the event also includes The Living Nativity scene on select dates. A longstanding annual event, this is the 21st year of the Glittering Lights event and it has become an important staple in the Las Vegas community as it supports charities including Speedway Children’s Charities and Goodwill of Southern Nevada. Each night, the event is open for entry at 5:30pm and admission is per vehicle. Accompanying music is provided through a designated radio station as attendees have options for concessions that include hot cocoa, hot apple side, buttered and kettle corn. For more information, visit Glittering Lights Event.